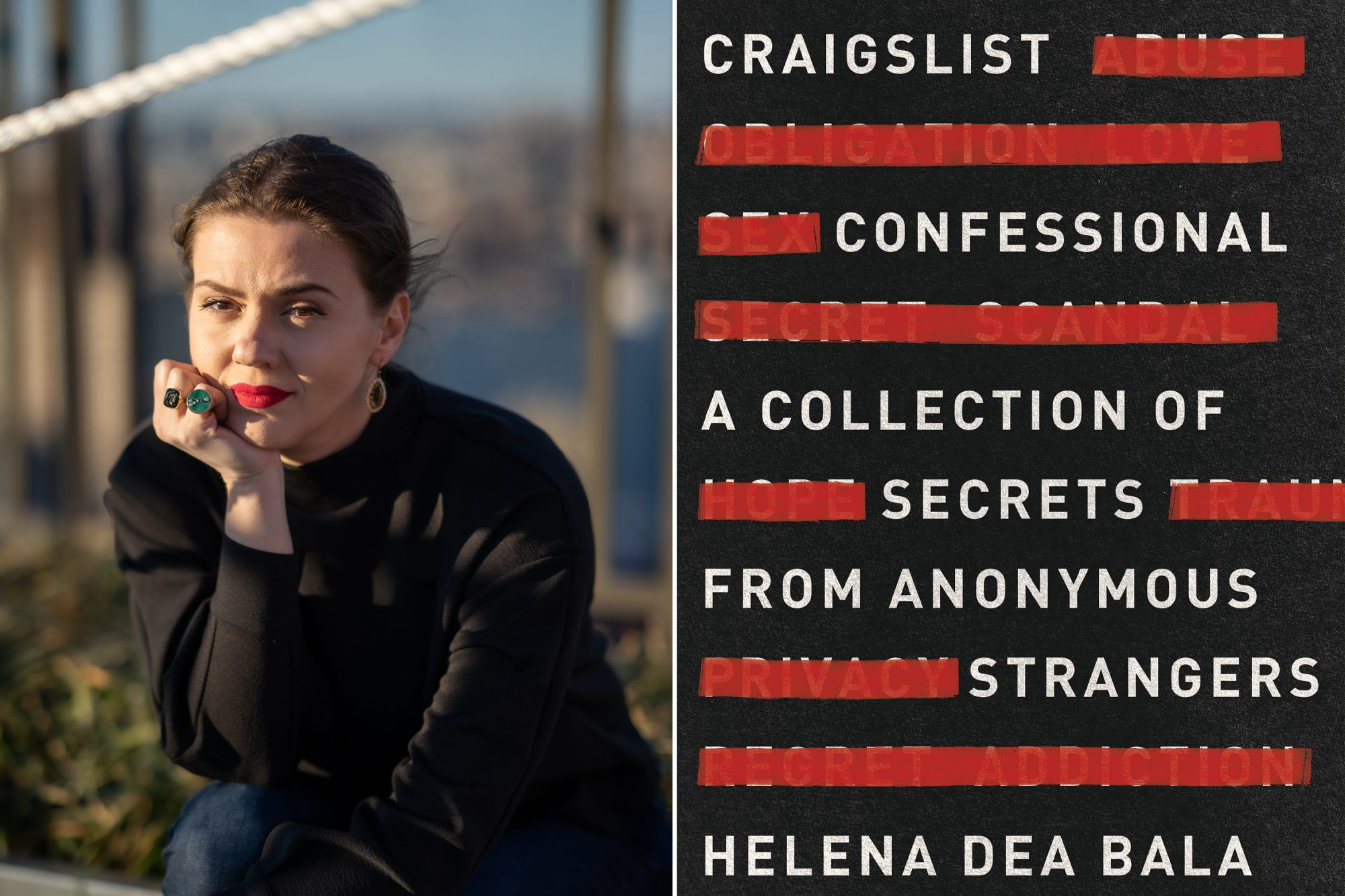 Bala, a higher-education lobbyist, seemed to have a fulfilling life. She and her family had come to American from Albania when she was a girl, and she grew up “dirt poor.” Her father, an ambassador back home, worked as a security guard, and her mother — formerly a doctor in Albania — cleaned houses. Bala helped on weekends.

Bala eventually achieved her goal of graduating from law school, and she earned a job on Capitol Hill. But she was also drowning in debt and beginning to feel that her job was pointless.

That’s when a chance conversation with a homeless man sent her life in a new direction.

His name was Joe, and he often panhandled for change outside Bala’s building. She would say hello and bring him leftover sandwiches.

One day, she passed him without dropping off food. “Are you upset with me?” he asked, wounded.

The question brought Bala nearly to tears. She went around the corner, bought a sandwich to share, and sat down with Joe. He shared intimate details about his life, including how he’d become homeless. Bala reciprocated by telling him — a near-complete stranger — about her difficult childhood.

And that’s when an idea was born.

Energized by the helpfulness of the confessional session, Bala began thinking about how she could offer a similar service to others.

She logged on to Craigslist and placed a personal ad: “Tell me about yourself.”

It was an offer to listen, for free, to anyone interested in telling her things they’d never told anyone else. She would simply listen non-judgmentally, then they would go their separate ways and that would be that.

Bala was flooded with replies, and she soon began meeting random people at coffee shops and other public places — to hear their personal tales of drug abuse, sexual confusion and marital infidelity.

After a while, and with her subjects’ permission, Bala began writing down the stories. The result is the new book “Craigslist Confessional: A Collection of Secrets From Anonymous Strangers” (Gallery Books).

“I think that every single person I’ve spoken to has had a powerful story to tell,” Bala told The Post. “Each one of us has a story like this in us.”

Those range from tales of sex addiction to extreme depression, falling out of love with a spouse to becoming an escort to pay for drugs.

A couple years ago, Bala’s own story shifted after the writer moved from DC to New York City. She now lives on the Upper East Side with her husband and son and writes a column for the business publication Quartz.

Read More:  Watch What Happened When This Woman Did 200 Pushups a Day for a Whole Month

“People in New York are a little bit more wary, a little less open to an experience like this,” the author said. “Having lived here for a couple years, I understand why you can’t be too trusting of a stranger you meet online saying, ‘Tell me your deepest secrets.’ ”

But the meetings do still happen, lasting from around two hours to as long as eight. Bala said she had to practice how to interact with her subjects so as to not appear judgmental or “hijack the narrative.”

She admitted the job takes an emotional toll on her, but said: “When the emotion has dissipated, you look back at these stories and you realize they’re all about the strength of the human spirit — and how can that be anything other than inspirational?”

Here are snapshots of five of those stories.

During Erika’s freshman year of college, she felt alone and depressed. She met someone online who introduced her to cocaine, and soon found herself with a $ 100-a-day drug habit.

At a house party, she met an effervescent woman named Mandy, who seemed to have stacks of cash. So Erika — broke — decided that whatever Mandy was doing, she would do.

As it turned out, that meant becoming an escort.

One regular paid her $ 120 to sit on balloons. “He wanted me to look right at him, maintaining eye contact as I lowered myself onto a balloon, and then move [to another balloon] carefully — without bursting any of them,” Erika told Bala.

Eventually, Erika was busted by a cop. Only instead of arresting her, he raped her. She returned home to her parents, confessing what she’d been doing, and got clean.

He’s too depressed to leave his apartment

“I’m in my apartment for 95 percent of my life,” the shut-in, who suffers from severe depression, told Bala. They spoke over the phone because George wasn’t up to leaving the house.

“You got a sense from George that these types of conversations did not happen very often. I remember a rush in his voice to get it all out, like he was stumbling over his words. It was very sad,” Bala told The Post. “It was palpable, the loneliness and the isolation.”

‘Sometimes, I’m so depressed that I don’t get out of bed for weeks on end.’

The man washes his clothes once or twice a year and showers maybe once a month. He goes months without taking out the trash in his apartment, which is piled with takeout containers and other trash.

“Sometimes, I’m so depressed that I don’t get out of bed for weeks on end, and when I feel better, I notice that I’ve gotten bedsores,” he said.

He was once married but was eventually “defeated by depression.” He hasn’t seen his daughter in more than 10 years and his son in two, and mostly passes the time by watching TV.

George’s biggest daily concern is whether this is the day he’ll be found dead in his apartment.

“I don’t have cats, so at least I know I won’t be partially eaten when I’m found,” he said.

In a weird way, however, he’s at peace with his situation.

“Life is easier now that I’ve accepted my disease,” George added. “I have few regrets … Hey, I lived a full life.

He sold out his friend to the cops

Terry and Charlie grew up together, as close as brothers, but their paths diverged after high school: Terry got a college football scholarship, while Charlie chose a life of crime.

‘I’ve always felt guilty about what I did.’

One day, Charlie called Terry and confessed he had started robbing pharmacies. He asked for his old friend’s help boosting an ATM, but Terry “didn’t have the stomach” for it.

A few weeks later, Charlie called back, crowing: “I did it!”

Terry eventually married and had a family. But he got hooked on pain pills and found himself out on the street. Charlie, now a major drug dealer, took him in. Terry began using heroin. Desperate for money, the pair turned to robbing storage units.

The cops eventually got wise, and the only way Terry could dig himself out of trouble was to help police catch his childhood friend — so he tipped them off to his location.

“I’ve always felt guilty about what I did, like I betrayed my own brother,” Terry told Bala. “I couldn’t risk getting caught up in it. I am clean now … But, man, the past weighs on me.”

She always worried her daughter would die

In the early 1980s, Edie faced a parent’s nightmare: Her 2-year-old daughter needed open-heart surgery to correct a defect.

To prepare, she read her daughter a book about surgery and they joked about doctors wearing masks. “Even though my heart ached, I couldn’t let her sense my fear,” Edie told Bala.

When the girl was only 3, she needed another surgery. This time, doctors advised Edie to start planning a funeral. Despite the narrow odds, her daughter survived.

At age 12, the girl had to have an artificial valve put in. Because it was made for an adult and too big for her small body, she had to go to the hospital about once a week to have her heart shocked back into correct rhythm.

“I saw her body convulse from the shock. Every single time,” Edie said. Before one visit, Edie wanted to lighten the mood, so she took her daughter to a card shop across the street.

The girl spotted a card with a rose on it and exclaimed, “I want these to be my wedding invitations.”

Edie bought the card and had hundreds of identical ones printed. “Sometimes you need to have the audacity to believe that it will all be OK,” she told Bala.

The girl made it, and years later, as they made plans for her actual wedding day, Edie retrieved the invitations from the attic. She assured her daughter she didn’t have to use them.

“I know I don’t have to, but I really want to,” the daughter replied.

A fitness model, Scott spends all his waking hours working out, eating right and posting photos of himself on Instagram, five to eight times a day.

But he’s not happy.

“Nobody in my life knows … how unhealthy it has become,” Scott told Bala.

‘If I stopped doing it, I would be nobody. I have to buy into it now; it’s too late.’

He started working out in middle school because he was being bullied, and hoped to develop the confidence and “swagger” of Arnold Schwarzenegger.

The hobby took over his life, and now he finds it hard to maintain romantic relationships.

“My last relationship ended because I couldn’t let her see ‘the real me’ — the physical and psychological punishment, the grueling workouts, the bulls - - t social-media posts, the image obsession,” he said.

He admitted to being psychologically damaged, and said he goes online for validation as the likes roll in for his posts. “It’s like a drug,” he said.

Scott knows that going to the gym as much as he and the other Instagram models do is not a healthy lifestyle. There’s no balance, and he can’t bring himself to think about how much damage he’s done to his health.

But it also seems like there is no end in sight.

“If I stopped doing it, I would be nobody,” he told Bala. “I have to buy into it now; it’s too late. If the cracks show, people sense it. Especially online — people are vicious.”