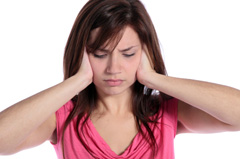 Tinnitus is a generic term used to describe a ringing or noise in the ears that occurs in the absence of external sound. This is a very common condition that is thought to occur in up to 15% of people. It can occur in one or both ears, and often people will describe the sound as “coming from their head.” There are a variety of descriptions that people use for their tinnitus such as whooshing, ringing, pulsing, and/or buzzing, and the quality of the sound varies by individual.

Symptoms of tinnitus can cause great distress

While tinnitus can be caused by conditions that require medical attention, it is often a condition that is not medically serious. However, the distress and anxiety it produces can often disrupt people’s lives. Because of the negative impact tinnitus can have on people, it may be helpful to learn more information on what symptoms are common and benign (not serious), and those that require medical attention and interventions.

Tinnitus can be broken down into two major types: pulsatile and non-pulsatile.

Pulsatile tinnitus is a noise in the ear that sounds like a heartbeat. Often people will describe a perception of a pulsing in their head and the ability to hear their heartbeat. Tinnitus that sounds like someone’s heartbeat can be caused by normal or abnormal blood flow in the vessels near the ear. This type of tinnitus should be brought to the attention of your physician, because there are various rare conditions that cause it that may require medical intervention.

Read More:  Doctors go to TikTok to talk to teens about vaping and how celery juice won't cure cancer

Non-pulsatile tinnitus is more common, but it can be more difficult to identify a cause. Most often tinnitus is associated with a hearing loss. However, people can have tinnitus with normal hearing. While people with tinnitus often believe the problem is with their ears, there is some evidence in tinnitus research that suggests the noise originates in the brain, even though it is perceived through the ears.

Despite the list of possible causes of tinnitus, often times there may be no identifiable causes, and doctors generically say that a patient has tinnitus. Even if a source of the tinnitus is identified, most tinnitus is due to benign, or non-threatening, conditions.

Note: This list is not intended to be comprehensive, but to provide representative examples of things that may cause tinnitus.

Should I be concerned about tinnitus?

Even though tinnitus is often benign, there are some specific symptoms that should alert people to seek medical evaluation:

If you experience tinnitus with any of the symptoms above, it is important to discuss them with your doctor or an otolaryngologist, who is a specialist in diagnosing, managing, and treating medical conditions of the head and neck, including the ears.

What can I do about it?

The most important thing you can do about your tinnitus is discuss it with your physician. Often you will be sent for a hearing test, because most tinnitus is associated with some degree of hearing loss. The hearing test will often provide additional information to the physician about whether further tests are necessary.

If it is determined that tinnitus is caused by any of the conditions previously noted, treatment aimed at those conditions may offer relief. If there is hearing loss, hearing aids may help both hearing and tinnitus. Distraction techniques such as a white-noise machine or background noise may also help, particularly during sleep.

One of the challenges in treating non-pulsatile, benign tinnitus is that there are few medications that reliably resolve symptoms. It is also difficult to find medical therapies for tinnitus, because we are still working to identify a specific location where tinnitus originates. Despite this challenge, there is new research showing effective non-medication approaches to tinnitus, One example of this is neural stimulation techniques, which have shown promise in appropriate patients.

The most effective treatment for non-pulsatile, benign tinnitus is cognitive behavioral therapy. Specific behavioral therapy, called tinnitus retraining therapy, has consistently been shown to reduce tinnitus compared to other treatment modalities. This can also aid in addressing any underlying stress or anxiety about the condition.

Read More:  Should You Eat the New Fake Meats?

Ultimately, tinnitus is a very challenging condition for both patients and physicians. Being informed is important in helping you manage this condition. If you feel that tinnitus is interfering with your life or causing you significant stress, ask your physician about your options.