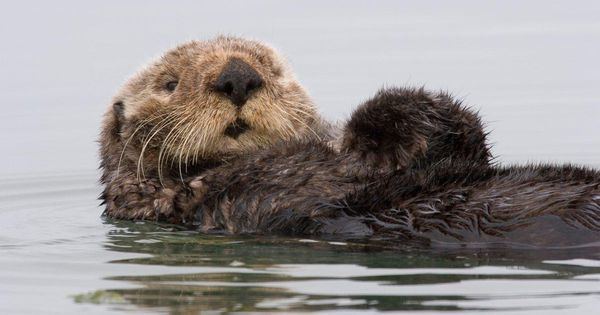 It has been established that most sea otters along the coast of California are infected with a potentially deadly parasite, Toxoplasma gondii. Although this parasite infects virtually any warm-blooded animal, from rats to birds to livestock and people, wild and domestic cats are its definitive hosts: the parasites undergo sexual replication in the cat’s gut, thereby creating hundreds of millions of egg-like oocysts that the cat sheds in its faeces. Contaminated faeces then enter the watershed through runoff or by being disposed of into the sewer system. Sewage treatment facilities are unable to kill or remove these environmentally-resistant oocysts from treated water, so they end up in coastal waters where marine mammals can ingest them in contaminated food or water.

Initial infection with T. gondii is rarely symptomatic, although it may cause mild flu-like symptoms — at its worst. But unlike in most of its hosts, infection with this parasite is potentially deadly in marine mammals, such as sea otters, Enhydra lutris, where it can cause a deadly brain infection. Recent studies suggest that T. gondii is a significant cause of sea otter disease and death (i.e.; ref). Another study found that as many as 70% of sea otters living along the Pacific Rim are infected with T. gondii (ref). Yet curiously, T. gondii was the cause of death for only 17% of infected otters, and was identified as a contributing factor to the deaths of another 12% (ref). Why is there such a dramatic difference between infection rates and the proportion of sea otters dying from T. gondii?

Although humans rarely die from toxoplasmosis, it can happen due to a combination of factors, including immune system dysfunction, and which infective stage (oocyst or tissue cysts) and strain was ingested. Could some T. gondii strains be more virulent than others in sea otters, too?

To answer this question, lead author, wildlife veterinarian Karen Shapiro, an associate professor at the University of California, Davis and at the Wildlife Health Center at UC Davis, collaborated with a team of veterinary researchers from University of California, Davis, the California Department of Fish and Wildlife (CDFW) and the University of Nebraska, Lincoln, to identify T. gondii strains found in 135 stranded sea otters necropsied by the CDFW between 1998 and 2015. (A necropsy is an animal autopsy.)

Study co-author, Melissa Miller, who is a veterinary pathologist with the CDFW, assessed the otters for whether T. gondii was either the primary cause of death, or a contributing cause. The researchers then employed several DNA techniques to identify which T. gondii genotypes were most prevalent in these sea otters, and compared these T. gondii strains to those found in wild and domestic cats living along nearby watersheds.

The data pointed squarely at T. gondii strains known as ‘Type X’ as being more deadly to sea otters than any other strains. Further, the data showed that the Type X strains that proved so deadly to the sea otters in Monterey Bay came from two feral cats and one bobcat, Lynx rufus. This confirms earlier findings that virulent T. gondii strains originate in cats, and supports the argument that faecal contamination on land ends up contaminating coastal waters with lethal pathogens that can harm or kill marine wildlife.

“We now have a significant link between specific types of the parasite and the outcome for fatal toxoplasmosis in sea otters,” Dr. Shapiro said in a press release. “We are actually able to link deaths in sea otters with wild and feral cats on land.”

But Dr. Shapiro and her collaborators noted in their paper that, in addition to infecting and killing sea otters, T. gondii can infect and kill other marine wildlife, including critically endangered Hawaiian monk seals, Neomonachus schauinslandi (ref), and Maui’s dolphins, Cephalorhynchus hectori mauii (ref), but the data supporting this link are more robust for sea otters.

This finding raises the question: are these endangered marine mammals most vulnerable to infection by Type X, like sea otters, or are they succumbing to a different strain of T. gondii? No one knows yet.

T. gondii is only one of what is probably a vast army of pathogens that humans and our domestic animals are flooding into the environment.

“Toxoplasma is one heavily studied pathogen that we care about, but there are many other viruses and bacteria that are on land and being flushed to the ocean that we probably aren’t aware of yet,” Dr. Shapiro said in a press release.

What might be the health effects of these other, unidentified, pathogens on local wildlife — and on people? No one knows.

People can take control of the effects that they, their pets and livestock have on wildlife and on the environment. For example, the spread of T. gondii can be minimized by keeping cats indoors at all times and bagging and disposing of their faeces in solid waste rather than dumping cat poops outdoors or flushing them down the toilet. This will reduce the chances of T. gondii oocysts contaminating local waterways where they can infect wildlife for months — or years — into the future.

Cleaning litter boxes daily followed by good hand washing technique will greatly reduce the chances that a cat’s human caregivers could become infected with T. gondii, because the oocysts don’t become infective until 1-5 days after being shed into the environment.

To prevent pet cats from becoming infected (if they aren’t already), it’s also important to prevent them from killing or consuming rodents and birds because T. gondii is commonly found in tissues of these animals.

Including a rain garden and native grasses in backyard landscaping is another way that contaminated runoff can be absorbed and filtered naturally, thereby preventing it from reaching coastal waters. At the municipal level, replacing concrete with water-permeable surfaces whenever possible also reduces contaminated runoff.

It’s also important that we, as a community, support conservation measures to restore and protect wetlands, forests, grasslands and other natural areas, especially those that are downstream, to reduce pathogens entering coastal waterways because these spaces act as natural filters.