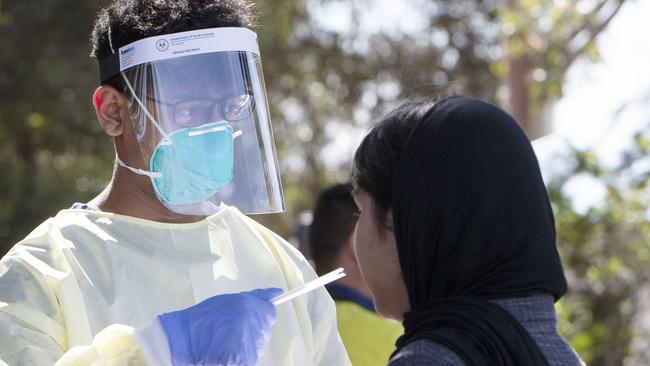 SA is the second state to be affected by breaches in the system, with Victoria only recently emerging from its deadly second wave, which originated in quarantine hotels.

Premier Steven Marshall made the announcement on Wednesday afternoon, despite the state only recording 22 cases in total.

The Australian Defence Force has been called in to SA authorities in controlling the outbreak, and it was announced additional officers would be deployed as the state ramped up its restrictions.

Prof. Kelly praised South Australia for going “hard, fast and broad” in their actions to stifle the spread of coronavirus, following the state’s decision to return to lockdown.

He said all 22 active cases are all related to the outbreak which has been traced back to an international arrival at hotel quarantine on November 2.

“At the moment it’s all linked to a breach of hotel quarantine and linked to an arrival on November 2,” Mr Kelly told reporters.

“Everyone of those 22 cases are linked and we know through genomic testing.”

“They have also gone harder as well with a six day pause.”

Mr Kelly said if SA also required more contact tracers, then they would be supplied.

He said it was the swift actions of an alert young medic who reacted to hearing a single cough that alerted the rest of the state to the latest outbreak.

The patient had presented at hospital for completely different reasons when they coughed within earshot of the doctor.

“There was a young doctor in the hospital in in northern Adelaide, who was absolutely essential in picking up that first case,” Mr Kelly said.

“The family member that went to that hospital, went to the emergency department with completely different nervous spiritual symptoms.

“One of the doctors heard the person coughing and did the test, and that’s how we know that there’s something going on in South Australia very early, and they’re getting on top of it, very early.”

The outbreak has led to South Australia will go into a full lockdown for at least six days from midnight Wednesday to stifle the latest COVID-19 outbreak.

The lockdown includes schools and universities will close as well cafes, pubs, takeaway shops and restaurants.

Masks are encouraged and one person per household per day is allowed to leave for essentials, such as groceries or for medical reasons.

Weddings, funerals, holiday home rentals are banned and there will be no interstate or regional travel.