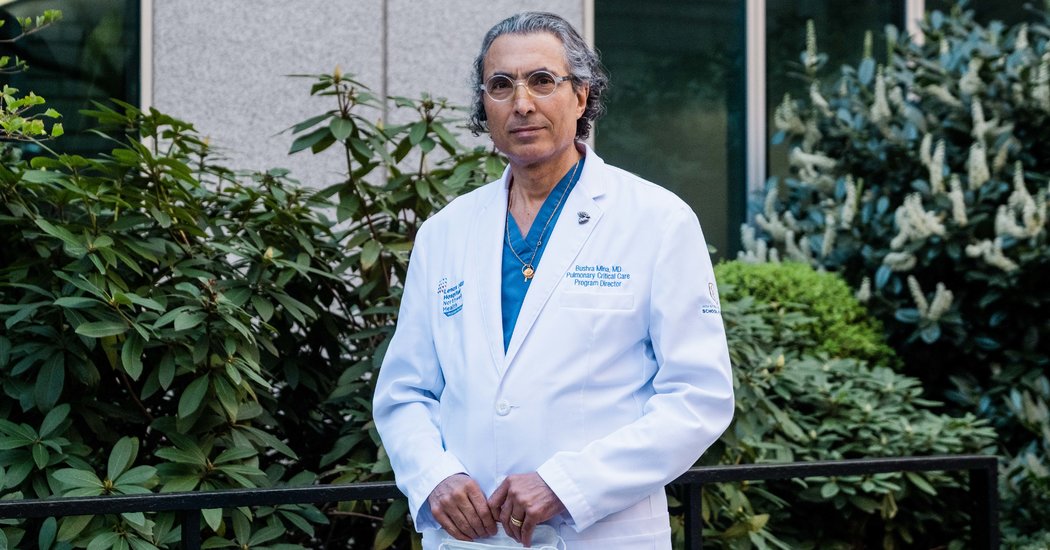 Just a month ago, Dr. Bushra Mina had no playbook to treat patients who were arriving with coronavirus at Lenox Hill Hospital in Manhattan.

His first encounter was with an older man whose health declined quickly. No drugs were approved to treat this highly infectious virus, and there was little Dr. Mina could do but provide supportive care.

Weeks later, Dr. Mina, the chief of pulmonary medicine at Lenox Hill, is on the 16th revision of guidelines shared among doctors as they assess the ways the virus is emerging and advancing in patients, and what possible treatments should be applied.

Now most Covid-19 patients at Lenox Hill who are not on the verge of dying receive a five-day regimen of hydroxychloroquine, the long-used malaria drug that President Trump has repeatedly promoted as a “what have you got to lose” remedy. While his own top health officials are more cautious — noting there is limited evidence about the drug’s benefits — doctors across the country have been prescribing the drug for weeks.

Dr. Mina doesn’t know if the hydroxychloroquine is helping his patients. He is well aware that there are no rigorous clinical trials showing that the drug works. But he can’t wait for the evidence to come in, he said, when people are dying.

“I think it’s a battle, and your options are very limited,” Dr. Mina said. “You’re really looking for what you can do with whatever evidence you have.”

Hydroxychloroquine and a related drug, chloroquine, have been used for decades to treat and prevent malaria, and hydroxychloroquine has been used by people with lupus and rheumatoid arthritis because it is known to calm the immune system. In laboratory tests, it has been shown to block the coronavirus from invading cells, although it hasn’t been proven in human trials. The drugs are not recommended for people who have abnormal heart rhythms because it can make them worse.

Almost overnight, the hard-to-pronounce drug has become a litmus test for support of the president. Conservative talk show hosts and supporters like his personal lawyer, Rudy Giuliani, praise the drug’s potential, while political opponents have scoffed at what they see as another way that Mr. Trump has undermined scientific inquiry.

For weeks now, doctors around the country have been giving the drug to patients at various stages of the disease, and as a preventive measure to some if they’ve been exposed by family members or in health care settings. But even after treating hundreds of patients with the antimalarial drug, the doctors interviewed did not report clear results or remarkable recoveries that can be traced to the drug.

In addition to Lenox Hill, other major hospitals in outbreak hot spots are using hydroxychloroquine as part of their protocol. They include Massachusetts General Hospital in Boston and Rush University Medical Center in Chicago, which each recommend it on a case-by-case basis and when clinical trials are not feasible, and Ochsner Health in Louisiana, which administers it routinely to coronavirus patients.

This week, researchers in China made public the results of another study of hydroxychloroquine, of 150 hospitalized patients. The study, which has not been peer-reviewed, found that patients who were given the drug did not fare significantly better than those who did not receive it, nor did they experience more serious side effects.

Some medical societies have recently recommended against its regular use. The Infectious Diseases Society of America recently advised that use of hydroxychloroquine be limited to clinical trials, as did the American Thoracic Society.

At the Henry Ford Health System in Detroit, researchers are beginning a 3,000-person clinical trial that will test whether hydroxychloroquine can prevent infection in health care employees and other front-line workers. But they have also given it to sick patients, outside of a trial, when there is little other hope.

“In many ways we feel driven to help patients who are in front of us — today — in the hour of their greatest need,” said Dr. Steven Kalkanis, the chief academic officer of Henry Ford Health System. “And there is a clamoring to use whatever we have at our disposal.”

But outside of a clinical trial, it can be hard to assess the drug’s value, especially when it is being given to a variety of patients, of different ages and medical conditions, and at different points in their disease. Based on the hospital’s experience, Dr. Kalkanis said, the drug’s benefits do not appear to be a slam dunk.

“For every anecdotal success story, we hear one where a patient unfortunately died,” he said. “It’s not coalescing around, ‘Oh my gosh, this is the answer.’”

The drug has generated excitement because a laboratory study, with cultured cells, found that chloroquine could block the coronavirus from invading cells, which it must do to replicate and cause illness. But drugs that show promise in the laboratory do not always translate to success in the human body, and other studies have found that it failed to prevent or treat influenza and other viral illnesses.

Early reports from doctors in China and France have said that hydroxychloroquine, sometimes combined with the antibiotic azithromycin, seemed to help patients. But the studies were small and did not use proper control groups — patients carefully selected to match those in the experimental group but who are not given the drug being tested. Research involving few patients and no controls cannot determine whether a drug works.

At most hospitals in the Ochsner Health system in Louisiana, including those in New Orleans, infected patients are routinely given a course of hydroxychloroquine. Patients in the intensive care unit are also given the drug if they have not received it earlier in their illness.

Dr. Leo Seoane, the chief academic officer at Ochsner Health, said the health system had declined to participate in research trials that included a placebo arm, in which some patients would be selected not to receive the drug. “We didn’t think it was ethical at this point in the crisis to withhold the therapies that could be beneficial,” he said.

But he acknowledged that even though the hospital gives the drug to nearly everyone who is admitted, the percentage of people who end up in the intensive care unit — about a third of those admitted — is similar to reports in other places where the drug is not used. “From a gut feeling, it’s hard for me to know that it is having an impact,” said Dr. Seoane, who is also a pulmonologist and critical care physician.

Dr. Sarah Doernberg, an associate professor of infectious disease at UCSF Medical Center in San Francisco, said she was selective about which patients were given the drug. “It’s not an established therapy that everyone should get,” she said. “I feel pretty strongly about that.”

A study of its effects in a clinical trial, versus a placebo, was needed, she said. “We can figure out the answers to this question, so that when people get sick months from now, we’ll know whether it will work.”

Those trials are getting underway now, with more than 100 studies of hydroxychloroquine in patients with Covid-19 posted to a federal clinical trials registry.

A placebo-controlled trial financed by the National Institutes of Health began enrolling patients last week at Vanderbilt University Medical Center in Nashville. That trial aims to enroll more than 500 people who have been hospitalized. Several other institutions around the country, including NYU Langone Health in New York, are testing whether the drug can halt or prevent the infection in people who are at high risk of getting it, or have been exposed.

The drug is also being dispersed more loosely through the Strategic National Stockpile. Hospitals that administer drugs from the stockpile must report on the patients who use them, but not through a formal clinical trial.

Manufacturers have donated millions of pills to the stockpile, and are ramping up production. But Mr. Trump’s promotion of the drugs has also led to shortages, and people who rely on hydroxychloroquine — like those with lupus and rheumatoid arthritis — have had trouble refilling their prescriptions.

In an interview Thursday with the Washington Post, the F.D.A.’s commissioner, Dr. Stephen M. Hahn, said he has not felt political pressure to favor hydroxychloroquine. “I can promise the American people that F.D.A. will use science and data to drive our decisions, always,” he said.

Those who favor conducting trials point to several previous drugs or therapies that were believed to show a benefit, until more evidence revealed the opposite. In the 1990s, for example, some states required insurers to cover stem cell transplants and high-dose chemotherapy treatments for breast cancer, under pressure from patient groups and others. But those interventions were later shown not to be any better than less-invasive treatments.

Another risk, some said, was that if a drug were too readily available — or portrayed in too positive a light — people may not want to chance enrollment in a trial that risks getting a placebo, and not the drug.

Dr. David Boulware of the University of Minnesota said enrollment is slowing in the national trial he is overseeing of up to 1,500 people to test whether hydroxychloroquine works preventively.

He does not know why participation is slowing, but he added that Mr. Trump’s message is not helping.