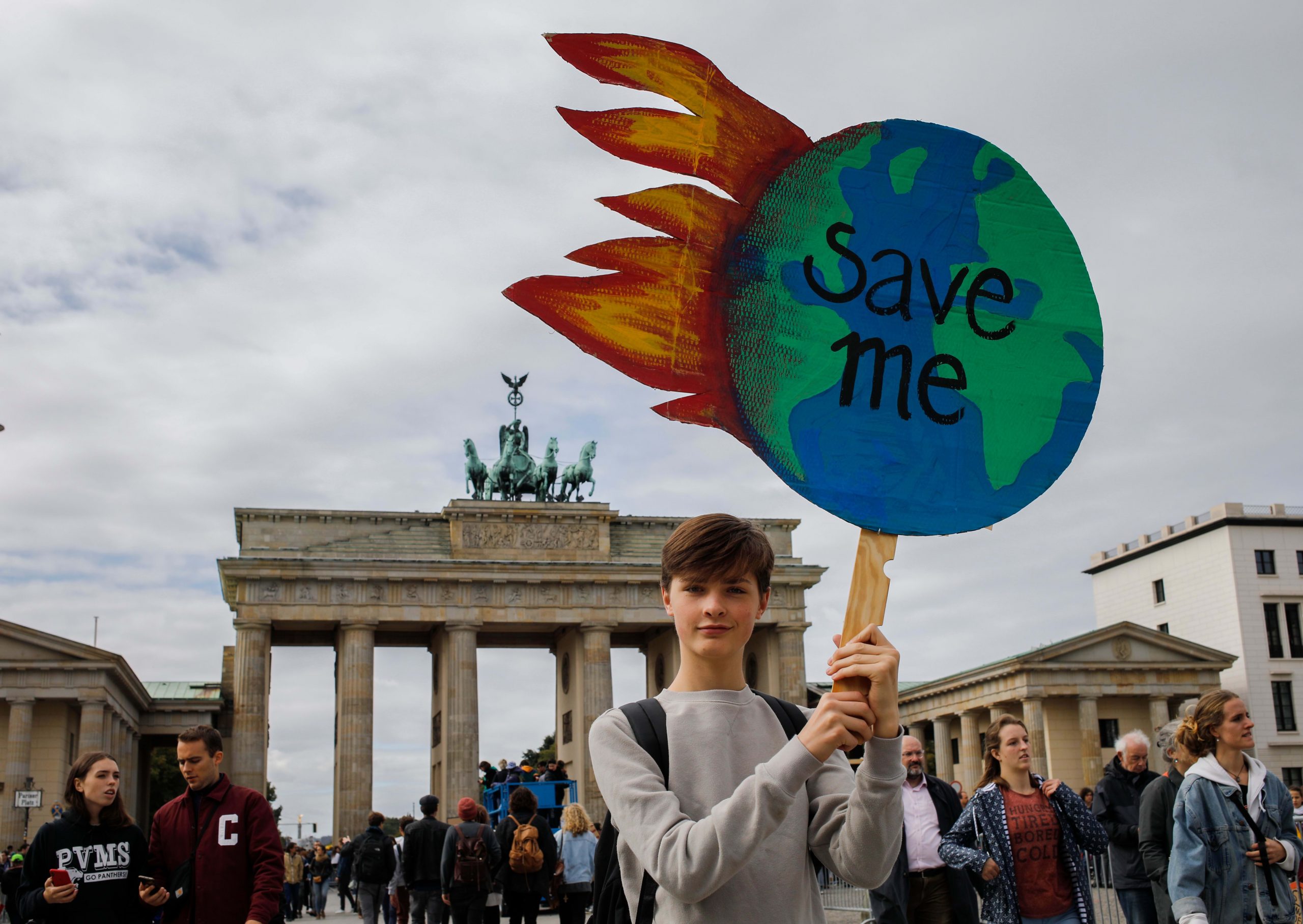 A protester holds a globe-shaped sign reading “Save Me” during the “Fridays for Future” demonstration in Berlin during a protest for climate action on September 20, 2019, part of a global climate action day.

Climate scientists believe the unprecedented measures in place to tackle the coronavirus pandemic give a glimpse of what could be possible when it comes to fighting the climate emergency.

The coronavirus outbreak and the climate crisis are two inherently different global risks, but both have a potentially devastating human cost. Despite this, only one has kickstarted widespread action across the globe in recent weeks.

With COVID-19 infections now confirmed in more than 150 countries, governments around the world have imposed war-like measures to contain its spread.

Some countries have been put into lockdown, with public gatherings canceled, schools closed, and citizens being advised to avoid discretionary travel and work from home over the coming months. Emergency funds have also been released for businesses struggling to stay afloat.

All of these measures have been implemented to help save lives.

“This is the first time I have seen governments choosing humanity over economics in such a significant way — ever,” Gail Whiteman, director of the Pentland Centre for Sustainability in Business at Lancaster University, told CNBC via telephone.

“This is a ‘yes we can’ moment for the climate crisis,” Whiteman said, referring to former President Barack Obama’s iconic address in 2008.

Uniting behind the science

Climate scientists have been calling for governments to take climate action seriously for decades.

Last year saw the hottest year on record for the world’s oceans, the second-hottest year for global average temperatures and wildfires from the U.S. to Australia.

But despite some international agreements, countries have typically been slow to adopt measures to protect their citizens.

“There is a mistaken belief that governments can dodge the climate bullet and get away with it. That’s not true,” Whiteman said.

She explained that it was important to understand that the climate emergency is also a global health crisis.

A layer of pollution can be seen hovering over Los Angeles, California on October 17, 2017.

Air pollution kills an estimated 7 million people worldwide every year, according to the WHO, with nine out of 10 people thought to be breathing air containing high levels of pollutants.

As of Friday, more than 244,000 people had contracted COVID-19 infections, according to data compiled by Johns Hopkins University, with 10,031 deaths.

“When it comes to the coronavirus, we have seen people uniting behind the science — at least we have done with medical science. Now it is time to listen to climate scientists,” Lancaster University’s Whiteman said.

‘Coronavirus is nothing compared to the climate crisis’

Johan Rockstrom, director of the Potsdam Institute for Climate Impact Research, said the failure to recognize the climate crisis as an emergency was partly psychological.

“The coronavirus crisis is a better lesson than the financial crisis because, while it is still quite like a creeping crisis, it is like a fast-forward run of the climate crisis. The difference is that instead of it taking place over four decades, it has taken place over four weeks,” he said.

Demonstrators protest the IMF and World Bank’s investments in fossil fuels and urge them to confront climate change as they march outside the World Bank and IMF Headquarters during the organizations, Annual Meetings in Washington, DC, October 18, 2019.

Read More:  Coronavirus Was Moving Through NY in Early February

Speaking to CNBC via telephone, Rockstrom emphasized that the degree of risk between the coronavirus pandemic and the climate crisis was “completely incompatible,” as the latter is much more serious.

Bob Ward, a director at the Grantham Research Institute on Climate Change at the London School of Economics, told CNBC via email: “Avoiding dangerous climate change will require urgent action sustained over the next 30 years while continuing to improve lives and raising living standards, not by shutting down the economy and society.”