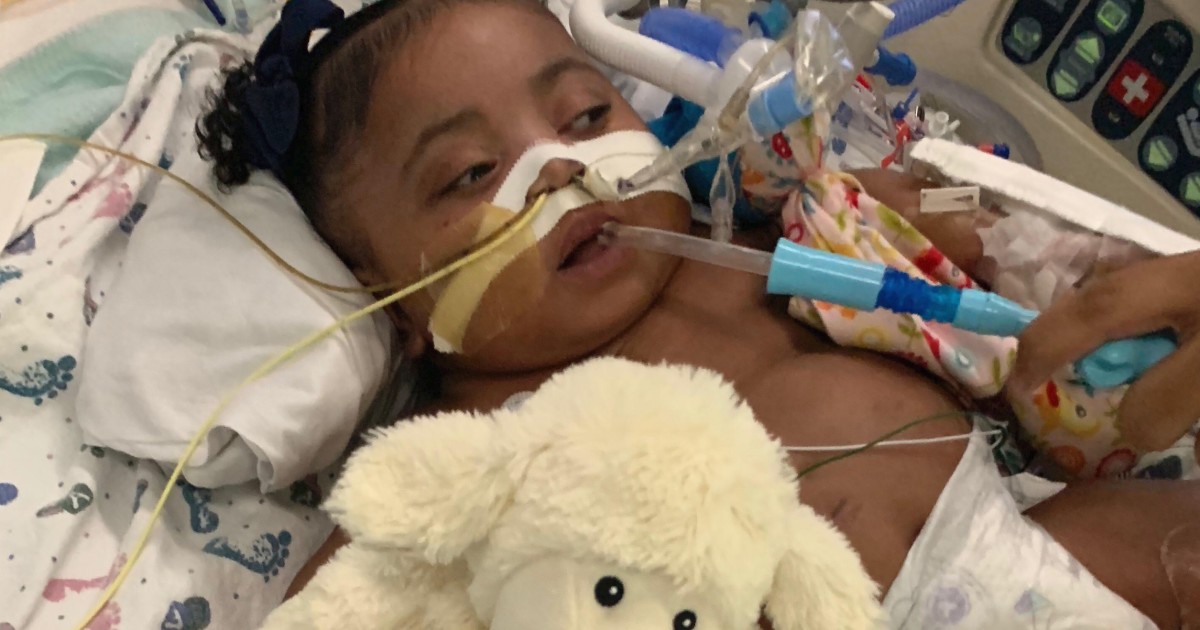 Texas “pro-life” groups are divided over the prospect of removing the respirator and feeding tubes from 11-month-old Tinslee, who was born with incurable heart and pulmonary defects and has been on life support since she was a newborn.

Tinslee’s mother, Trinity Lewis, is in a legal battle to keep her daughter alive and receiving medical care indefinitely or until she is able to find another hospital to treat Tinslee. Lewis maintains that Tinslee is not suffering despite what Tinslee’s doctors at Cook Children’s Medical Center in Fort Worth, Texas, say. She says Tinslee is “sassy,” loves the animated movie Trolls, and doesn’t like to have her hair brushed. Texas Right to Life, the state’s oldest and largest anti-abortion group, has defended her assertion that she, as the mother, should have the final say in any end-of-life decision.

Other state anti-abortion groups, such as the Texas Alliance for Life, believe, as do Tinslee’s doctors, that the girl is in constant pain and will never recover. Texas Alliance for Life has avoided intervening on Lewis’s behalf, and Dr. Joe Pojman, the group’s executive director, said the hospital is justified ethically in following Texas law, which says an ethics committee of physicians may remove a patient like Tinslee from life-sustaining machines after 10 days if they conclude that her health will not improve.

“The ethics committee at Cook Children’s Medical Center in Fort Worth, the facility that has wonderfully kept Tinslee alive since birth, agreed with the doctors’ assessment that the best course of action was to discontinue life-sustaining intervention causing her undue harm,” Pojman wrote in the Federalist.

The groups, both dedicated to opposing abortion, euthanasia, and assisted suicide, disagree on the constitutionality of the 10-day rule. The Texas Alliance for Life supports a Jan. 2 court decision allowing Tinslee’s doctors at Cook Children’s to remove Tinslee from life support. While also seeking out other hospitals for Tinslee, Lewis is working with Texas Right to Life to appeal the decision on the grounds that the 10-day rule denies patients due process.

Texas Right to Life argues, despite physicians testifying otherwise, that Tinslee’s condition is not fatal and that the 10-day rule “allows a hospital committee to pull the plug on the child against her mother’s will for any reason.” The group called a press conference with Lewis on Jan. 6 to advocate for Lewis’s right to make health decisions for her daughter.

“Just like any parent, I want the best for my daughter. I definitely respect Tinslee’s physicians’ abilities and their opinions, but I have not had a voice in her current care plan,” Lewis said.

The Texas Alliance for Life, on the other hand, said the rule allows parents and doctors to work together to decide whether keeping a patient on life support is prolonging his or her suffering with no hope of recovery.

“We regret that there is a pretty stark difference between Texas Right to Life regarding the dispute resolution process,” Dr. Joe Pojman told the Washington Examiner. “We believe it’s the best part of the law because it allows doctors and families to decide what the best options are to provide for the terminally ill patient and gives the family time to find an alternative provider.”

Tinslee’s doctors said they were certain that keeping Tinslee alive was, indeed, prolonging her suffering.

Kyleen Wright, president of Texans for Life, a group that also opposes abortion and euthanasia, says the Texas Right to Life’s advocacy to keep Tinslee alive is a sign of “extremism.”

“Now, it seems to be this position that you always treat no matter what, regardless of the state the patient is in,” Wright told the Washington Examiner. “This is extremism as far as that there’s never a situation where you stop treating someone who’s dying. Torturing people who are clearly dying is extremism.”

Physicians caring for Tinslee testified before Sandee Marion, Chief Justice of the 4th Court of Appeals in San Antonio, Texas, on Dec. 12, saying that Tinslee has several “dying events” per day and that she has to be resuscitated constantly. They also have to keep her sedated and paralyzed around the clock. Otherwise, she would move the ventilator and feeding tubes keeping her alive.

Dr. Jay Duncan, one of Tinslee’s attending physicians, testified that doctors have done all they can do for Tinslee.

“There are no more treatments we can do to Tinslee for improvement,” Duncan said. “She is in pain.”

Still, Texas Right to Life said the group is committed to fighting on Tinslee’s behalf in order to protect her from doctors they say are making “quality of life” decisions.