The Tampax television advert ‘Tampons and Tea’ will no longer air in the same format after 84 complaints were made about the ad to the Advertising Standards Authority for Ireland.

The Procter & Gamble advertisement depicts two women having a conversation in a television chat show scenario.

The advertisement opened with the word “TAMPAX” on-screen. The chat show host appeared alongside a young girl seated in her chair. The host engaged with her audience and spoke as follows:

“Welcome back. We have a great show for you today.”

The host sat down and continued to speak:

“So, tell me, how many of you ever feel your tampon?” The young girl raised her hand and nodded her head to demonstrate that she had.

The host continued: “You shouldn’t, it might mean your tampon is not in far enough. You gotta get ‘em up there girls”. 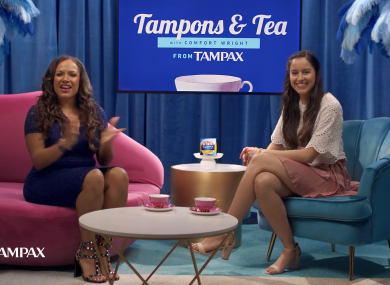 Some complainants considered it to be offensive and inappropriate to talk about such a sensitive topic in the manner portrayed.

Other complainants considered the advertising to be demeaning to women. They said that it belittled them and implied that they may be ignorant when it came to the matter of using tampons.

There were complaints that the advertising had led to questions from their children who had unnecessarily been exposed to the inappropriate content at a young age.

According to the ASAI, the advertisers Procter & Gamble said that when they produced this particular advertisement they had carried out extensive research and it became apparent to them that many consumers regularly felt discomfort all or some of the time when they were using a tampon, primarily because they were unsure how to insert the tampon.

The ASAI upheld the complaint that the advertisement has caused general offence and it should not run in the same format again.

The committee noted the level of complaint that had been received and the concerns expressed by complainants about the advertising and considered that it had caused widespread offence.