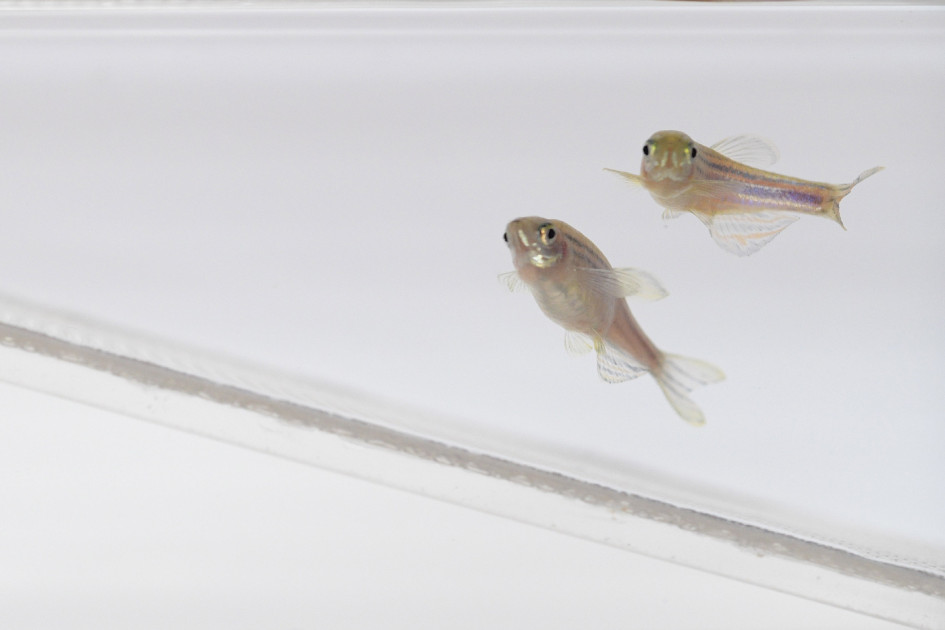 Digging deeper, the researchers used live imaging to identify specific brain regions that were activated by the mating and threat stimuli.

“When we presented both stimuli at the same time and looked at the brain, by and large we saw a response to just the reproductive stimulus, not the fear-inducing stimulus. And even further, the areas that were previously activated by the fear-inducing stimulus were now being suppressed,” said Gerald Sun, a former NIBR postdoctoral scholar and co-lead author of the study.

The zebrafish’s choice is the opposite of many other animals, including humans.

“The fish completely disregarded what is normally a very noxious, fearful stimulus, and that was really unexpected,” Sun said. “One potential explanation for why zebrafish have adopted this strategy is that they lay eggs that are externally fertilized. Humans and live-bearing fish make the opposite decision to flee a threat, because they need to survive for the next generation to be propagated.”

With a better understanding of zebrafish biology, researchers can use the animal model to study social and other behaviors.

“It’s important to establish what are the normal behaviors of zebrafish. Then you can study zebrafish as a model for diseases that affect social behavior, like autism and schizophrenia,” said Carmen Diaz-Verdugo, NIBR postdoctoral scholar and co-lead author of the study. “Once you define a well-established behavior and know the brain area responsible for it, then you can create genetic models that behave differently and use them for drug discovery.”

Although human brains are more complex than those of zebrafish, they still have a primitive component.

Read More:  Reasons You Should Take A TEFL Course

“We all have certain innate responses to the world around us. One hopes that with humans, you can modulate these to a certain degree. But on the other hand, your limbic system — your ‘fish brain’ — will play a big part in how you respond in different situations,” Fishman said. “We anticipate that elements of the underlying circuitry will be conserved and used for similar purposes in other species, although playing out in a species-specific manner.”

This work was funded by Novartis Institutes for BioMedical Research.