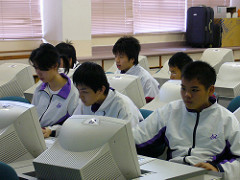 When the old values crumble and in their place, if new values do not take root, discontent is the outcome. This is visible in every part of the world whether developed or developing, more so, in countries like India where, in spite of forty seven years of independence, the common man is still crying for two satisfying meals a day. The state of the employed is no better. With the prices of essential commodities soaring up everyday while their incomes remain stationary, their life becomes a continuous struggle for existence. Unable to maintain an artificial standard of life in the society, while stark poverty stares at him, false prestige forbidding him from accepting the truth, the middle class man is a bundle of discontentment. And invariably discontent takes away the charm of life and it, in turn leads to irregular and undisciplined life. This indiscipline resulting out of discontent is visible every where – even in schools and colleges. The temples where peace and discipline should prevail, become centers of violence and indiscipline.

The old generation vehemently declares that they were not so un submissive, disrespectful and indiscipline in their times and blame the students for what they are now. It is true, as a rule, the present day student has no respect either for his teachers or for his elders, no inclination to prosecute his studies with a single minded devotion, no desire to keep to the moral code of conduct, and no sense of direction. He defies his teachers, comes out of his class at the slightest pretext, picks up a quarrel with the busmen, throws stones at the representatives of law and other, taunts the passers by, goes on strike obstructing the public – life and finally stoops to all sorts of malpractices in the examination. His teachers have no sympathy; to his parents he is a problem, to the public a menace and to the government, a terror. What is all this due to? Certainly these are only the symptoms and not the disease, the effect and not he cause. In fact not one cause, but many.

It is, to begin with, our system of education is to blame. The aim of education is, and should be, to produce people who can meet the challenges of life with courage and confidence, people who can shoulder tomorrow’s burdens undaunted by the perils involved, and people who can toil and strive to make what they have inherited better and richer. It is not merely to produce efficient doctors, lawyers, teachers and engineers but good doctors, lawyers, teachers and engineers as well. None of these, our present system of education is able to achieve. Year after year we simply turn out millions of ill equipped half educated men and women, who are afraid to stand upon their legs, people who shiver at the sight of their own shadows, people that wish to have a jolly ride always, and people who do not realize that we cannot all be captains, but some of us, system which we all agree is the brain child of Macaulay, yet, in spite of decades of debate and discussion we are yet to devise one that can successfully deliver the goods. We talk of the importance of value based education but we have the least idea of what it would be like. We declare that teaching is the noblest of all professions but assign the teacher a place among the lowest and the lowliest.

It is but natural we get second rate people for the teaching profession. With nothing to offer, without financial or social status, teaching is the last resort, for many, if not a stop gap arrangement. In either case the quality of the residue class is unaltered. We may say that, at least at the college level, the entry qualification is much higher than what is needed for other similar categories. It is true, but the cream of the student community looks to medicine and engineering or science as careers par excellence. So the branching off takes place at the higher secondary level itself, with the result the present day teacher has not much to offer to his wards, he fails to put them on the track to material progress or inspire them with lofty sentiments like, selflessness, courage, confidence and such like that make them responsible citizens of tomorrow.

Not the atmosphere in these temples of learning is unpolluted. All types of separatist tendencies – casteism, communalism, religious and political dogmatisms – have come to corrupt the serenity and sanctity so essential for the tasks of teaching and learning. The innocent mind amazed by the success of unethical pursuits, cannot for long, remain uninfluenced and finally gives in. If there is someone, who strong as a monumental rock, can withstand the pulls and cross pulls, he too cannot but give into despair when he fails to understand why he should pay for the sins his great grandfather had committed. The result is suicides and self immolations.

Read More:  What You Should Know About Health This Year

This fight for and against reservations, is because of lack of opportunities. In spite of all out efforts, population growth is not contained. With the increasing population, increase the numbers of the school going children too; and in order to accommodate all these additions, more and more schools are opened and from schools to colleges the progress is inevitable. The result is instead of millions of matriculates, we now have millions of graduates. As it is not possible to find placements for all these every increasing graduates and under-graduates, the entry qualifications for those jobs are steadily upgraded and various entrance examinations are conducted just ‘to filter away’ the unwanted stuff. This unwanted stuff. Moves from pole to pillar, moves heaven and earth to secure a berth. But finally disillusioned they give into despair and aimlessly drift. But this will have its echoes and reechoes in the corridors of colleges and universities.

There is always someone ready to grab the opportunity, wherever it may come from, be it in still waters or troubled waters, he is ready to fish. The desperate student is the first victim of the unprincipled maneuvers of the self seeking politician. He exploits his innocence, baits him with hopes of bright future and makes him dance to his tunes, with the result, the college life becomes highly charged with political tempers. Discipline beats a fast retreat and violence takes the reins.

In fact it has become the order of the day, not only is India, but almost in every part of the world. There is a political awareness among the students. They register their reaction, at every turn of events, social or political. It is getting more and more difficult to throttle their voice and confine them to their hostel cells. Be it in India or China, Korea or Yugoslavia, they are out in the streets, voice their sentiments in clear and unequivocal terms and fearlessly try to change the course of events. The government which thinks that it knows better, ruthlessly puts down the agitation. Unnecessarily innocent blood is spilled. But behind every such agitation, some political party is sure pulling the ropes. In their stark selfishness, these politicians do not realize that it is their own sons and daughters that they are sacrificing and that they could settle their scores among themselves without involving these innocent children of the nation.

Read More:  Natural deodorants from Weleda – Do they work?

So the problem of student indiscipline is more deep rooted than it appears to be. It may not be possible to wipe it. Out at once; but an honest attempt must be made to eradicate the evil. It may not be again possible to allot substantial funds and place education on par with national defence for a poor developing country like India where the need is eternal vigilance. But everything has its own price to pay and unless we pay the price, the nation’s future, nay, its very identity will be in jeopardy. The first thing is to restore the teacher to the seat of honor and status he is due. Next and none the less important, is to restore the confidence the student community has lost in the system and give them a sense of direction. If the country’s defence structure fails, it is the country’s independence that is at stake; but if the country’s education system fails, it is the entire country that is at stake.