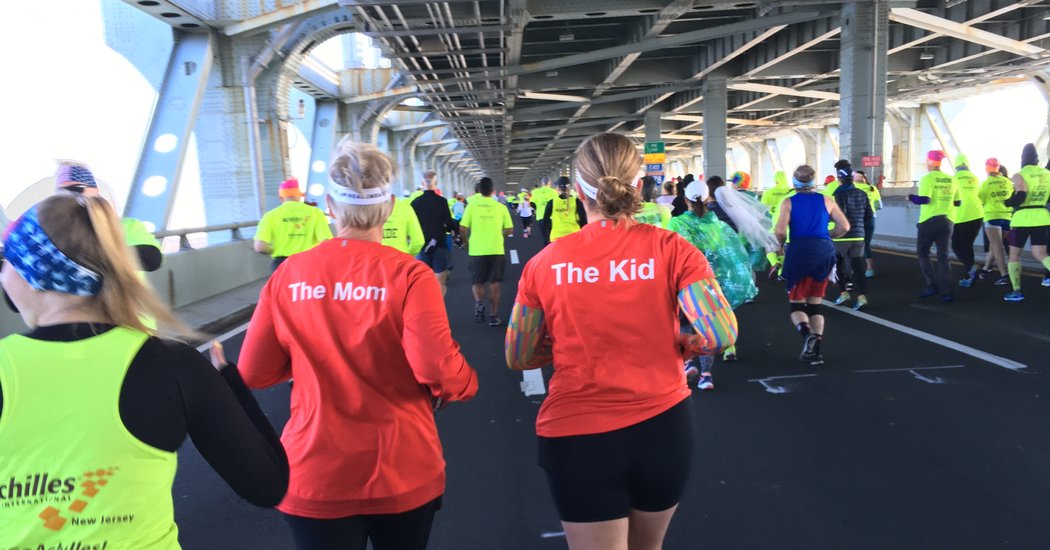 Welcome to the Running newsletter! Every Saturday morning, we email runners with news, advice and some motivation to help you get up and running. Sign up here to get it in your inbox.

Great marathon stories are ones of grit and determination, obstacles overcome — the cramp in the leg that threatens to wrench a runner apart, the stomach twisted that makes every step a terror, the legs that just don’t want to move anymore. They’re stories of hitting the Wall and, after digging deep down into some previously untapped well of strength, smashing through on the road to finisher’s glory.

My mother’s first marathon is not one of these stories. That’s because when Mary Miller, 64, ran her first marathon on Sunday in New York City, nothing went wrong. Oh sure, I had a cold, and she whacked her hand on a porta-potty’s toilet paper roll, which required a quick stop in a medic tent for an alcohol wipe and a Band-Aid. But none of this affected her running plan.

I had promised to run with her, but I don’t think she needed the help. I ended up being her personal running butler. Her pace was a slightly uncomfortable walk for me, so in crowded spots, I walked behind her. I pulled on the back of her shirt when she started running too fast, warned her of inclines up ahead so she knew when to walk. I held her water bottle at bathroom breaks, coordinated with my brothers so we’d know where they’d be on the sidelines, and carried her gloves when she didn’t want to wear them anymore.

In quiet moments along the course, I’d look at spectators and say, “This is my mom! Cheer for my mom!” to the point that I nearly lost my voice.

I’d stockpiled tricks to distract her from pain and help her get through, including terrible knock-knock jokes and dumb movie trivia. But she didn’t need them.

Of my 11 marathons, this was the least dramatic, even the most boring. But it was the most important. My mother, who graduated from high school the month Title IX was enacted and wasn’t allowed to run in high school because she was a girl, ran a marathon. She set a goal that, when she started running six years and 60 pounds ago, seemed as far away as the moon, and achieved it. As I ran next to her on Sunday, ticking off one mile after the other, from Staten Island to Manhattan, she looked as if she’d always been meant to do this one thing that had been denied to her, and she did it as if it were no big deal at all.

It was a long race, though. We knew it would take her more than seven hours to finish, and streetlights started to blink on as we crossed into Central Park, more than 22 miles into the race. “This reminds me of Disney World,” I said. We’d been running for so long that the air felt warm to us, and the soft street lamp light reminding me of walking down Main Street in Walt Disney World when my parents took us there when we were kids.

I thought about my family a lot as I ran through New York. I felt so lucky to have had all of my grandparents into their 80s, and I know that to be 39 years old and running a marathon — a marathon — with my mother is a dream I never even knew I could want until it came true.

After we crossed the finish line and hugged and cried and staggered back to our hotel and showered and sat down to big yellow beers at the TGI Friday’s in Times Square, I had a surprise for my mother: We’re going back. I’m taking her to Walt Disney World in January to celebrate the achievement of a lifetime.

A friend asked if we’re going to run the Disney Marathon while there. No, absolutely not. I’m not saying my mom will never run another one, but a gift for finishing a marathon is not to run another marathon. The trip is a time for us to celebrate her achievement, in a place that has meant so much to us both at different stages in our lives together, from a relationship that at times was a tense parent/daughter one and has now shifted more into friend/friend.

My mom has thanked me a dozen times for running with her on Sunday, and brought me turkey soup when I couldn’t shake my cold, and baked me a Jewish apple cake, which I love. But I should be thanking her for letting me tag along.

Read More:  To tilt your odds of success at work, get more sleep

Congrats, Mary Miller: you are a marathoner. And I am so proud of you.

Forward it to your friends, and let them know they can sign up here.