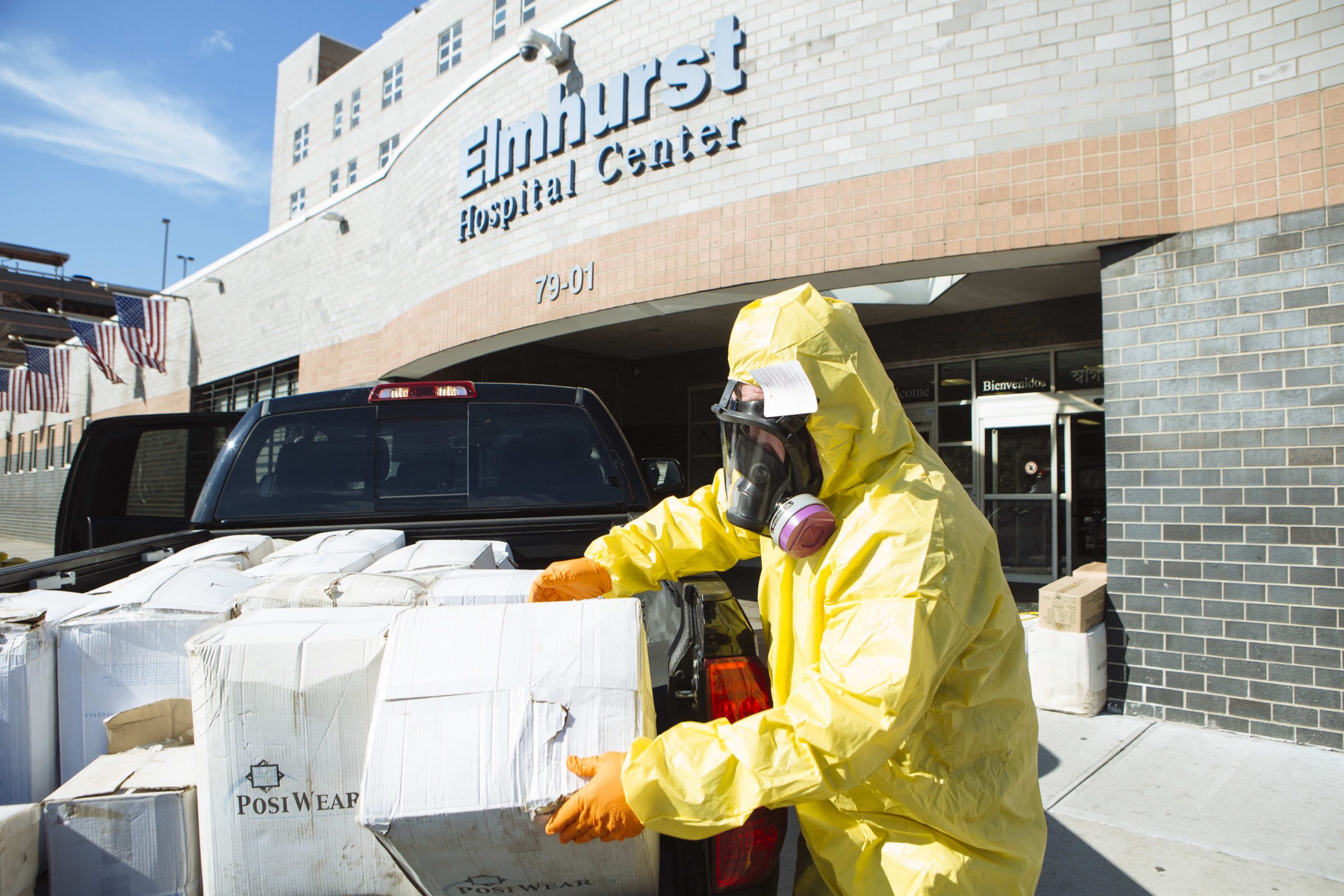 A person wearing protective clothing and a respirator mask donates protective equipment to the Elmhurst Hospital Center in the Queens borough of New York, U.S., on Thursday, March 26, 2020.

Medical staffing firms are racing to help meet the demand for doctors and nurses in states where coronavirus outbreaks are creating an unprecedented need. But what they need most to build up medical staff quickly, they say, is for states to ease licensing regulations.

“That’s really where we need the help from everyone, is to make sure we have a quick licensing process and that we can get people on the ground where they’re needed,” said Dr. Cole Edmonson, chief clinical officer at staffing firm AMN Healthcare.

“We are seeing an increase in demand, in particular, for nurses in [intensive care unit] and emergency room care — but every specialty is really increasing the need right now,” Edmonson said.

The firm is also seeing a higher demand in Houston and Atlanta, though those areas are not considered major hotspots right now.

Nomad Health, a staffing firm with more than 100,000 registered clinicians, is seeing demand for COVID-19 staffing across more than 30 states, with facilities in places such as Spokane, Washington, offering up to $ 120 an hour for medical ICU nurses, a number that’s well above normal pay.

Nazem says while states are moving to ease credentialing, under the current emergency it would be more helpful to have a uniform national policy.

As of Friday, 30 states had temporarily eased requirements, allowing doctors and nurses already credentialed in other states to practice across state lines without having to apply for in-state licensing. More than two dozen states have also taken steps to make it easier for retired medical professionals whose licenses have lapsed to be recertified during the pandemic, according to data compiled by the Federation of State Medical Boards.

New York has done both as the number of cases in the state has surged. Gov. Andrew Cuomo praised the outpouring of response from retired doctors and nurses in New York. The state saw 10,000 volunteers sign up in a single day, after asking for help and announcing that the state is easing rules for reinstatement.

“These are people who are retired, who did their duty, who could just sit at home, but they are coming forward,” said Cuomo.

In all, New York has more than 62,500 clinicians who have volunteered to help with the pandemic response.

Analysts at health-care consultancy Advisory Board say states may need to help hospitals meet the anticipated nursing shortage by easing credentialing rules around the nursing requirements in hospitals during the crisis.

“People are going to have to be creative about what types of nurses are caring for which types of patients at any given time,” said Christopher Kerns, Advisory Board vice president and director of health care strategy.

Kerns said hospitals may need to let licensed practical nurses, or LPNs, take on duties that are typically done by registered nurses, or RNs, who have more training. LPNs typically have two-year degrees and assist with primary-care needs in doctor’s offices, while RNs have four-year degrees.

“A second way to manage this is to relax nurse-to-patient ratio … so that nurses could care for more patients. In some areas that might be the only alternative,” Kerns said.

But putting more pressure on an already stretched staff could lead to more staffing issues.

For hospitals already facing unprecedented demand, maintaining staff levels could be a challenge. In China, nearly 4% of clinicians in hospitals became infected with the virus over the last two months.

School closures could result in the loss of another 8% of the hospital workforce during the current crisis, according to a study by researchers at Stanford University and the University of California.

“In some areas we might expect … almost 19% absenteeism, depending on the confluence of how much demand is on the system and how little childcare is available to those workers,” said one of the study’s authors, Dr. Sanjay Bosu, Collective Health head of research and population health.

Bosu said he and his wife, who is an emergency physician, are trading off shifts right now to care for their young children. He is based in San Francisco.

As the demand surges, it will get more challenging to make it work.

For temporary medical workers, those benefits may be harder to access than for full-time hospital staff. But some staffing firms are also changing some of their policies to offer support during the coronavirus outbreak.

Nomad Health is offering the clinicians it places in jobs up to two weeks pay and coverage of their health insurance, in the event they become infected with COVID-19 on the job.

“We’re doing it because it’s the right thing to do,” Nazem said, adding “that is going to burn through our cash, if that ends up being a substantial portion of our staff on the front line.”

About Acne After Antibiotics Anxiety Best Blood Cancer cause Coronavirus COVID19 Depression diabetes Diet does Education from Good health Help Know Learning Loss Medical More much Muscle News Pain Posted Pressure Science Should Student Study Take This tips Today Vitamin Weight when where Yoga ‘What
Iconic One Theme | Powered by Wordpress
This website uses cookies to improve your experience. We'll assume you're ok with this, but you can opt-out if you wish. Cookie settingsACCEPT
Privacy & Cookies Policy