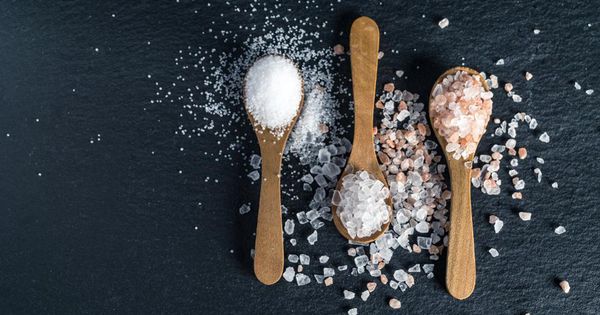 Yet another way to spend disposable income is to buy fancy salt. In fact, the word ‘salary’ originates from the Latin word salarium (‘sal’ meaning ‘salt’). Roman soldiers were either paid with salt, or paid in order to buy salt, a known precious commodity back in ancient Rome. The expressions “salt of the earth” and “worth your salt” also speak to the value of this substance. Regular table salt contains the ions sodium (“Na” on the periodic table) and chloride (“Cl” on the periodic table). Individually, these ions–sodium being positive and chloride being negative–are deadly. But when they undergo a perfect molecular bond, they create one of the most stable substances on earth.  Anyone who barely passed middle school chemistry knows this.

And unlike in ancient Rome, salt is pretty cheap. You can get a little over three pounds of iodized Morton salt on Amazon.com for about eight bucks.  That should last at least a year or two. Turns out you can get some of the pink stuff pretty cheaply as well. A one-pound sack of Sherpa Pink Himalayan Salt is only $ 6.99 with Amazon Prime. But that’s not the pink stuff that is being touted as the source of all good.  It’s the higher-end products that are being marketed as containing minerals not contained in plebeian table salt.

In short, we consume too much salt in our diets. The main component of  any salt regardless of the color, is sodium. Consuming too much sodium can wreak havoc on our blood pressure, cardiovascular system, and kidney function, to name a few precious parts of our bodies.  The U.S. Dietary Guidelines recommend consuming no more than 2,300 milligrams of sodium per day. This sodium is found primarily in salt. Any salt. Even pink salt. Despite it just seeming healthier, pink Himalayan salt is 98% sodium chloride.  The remaining 2% contains trace (meaning miniscule) amounts of other minerals such as potassium, magnesium, and calcium, giving it the pink hue.  And unlike traditional table salt, which is iodized, the pink stuff doesn’t contain significant amounts of iodine, which is an important nutrient in our diet. Lack of sufficient iodine consumption can lead to thyroid problems.

Because pink salt is being offered in health food stores, spas, high-end restaurants, and as a wellness product,  there is the false notion of additional health benefits. Certainly a little  (very little, to be imprecise) salt added to food never hurt anyone, but it certainly doesn’t help, and adds no nutritional benefit, regardless of the color. It has been drilled in to us not to add any salt to our already sodium-filled diets. Sprinkling the pink stuff on your food is essentially the same as sprinkling on the white stuff. It may just look prettier.

What if you don’t eat the stuff, but let it glow in your home? Pink Himalayan Salt lamps offer a pink glow by light passing through a pink chunk of salt.  This could look nice, producing a soothing pale pink color to the room.  But that’s about it.  No added health benefits. Of course you can also throw some of the pink stuff in your bath. But again, it’s a salt bath, be it pink, blue, or white.

Women are all-t0-familiar with the ridiculous “pink tax,” whereby female-designed (or simply ‘female-colored’) versions of male products are pricier, simply because they are made for women. Examples are shaving products, bath products, deodorants, or even pens and office supplies. As we are trying to bash the pink tax as yet another “cost” of being female, are we buying in to another pink product being more valuable, even if both men and women are sprinkling it on their gourmet french fries?