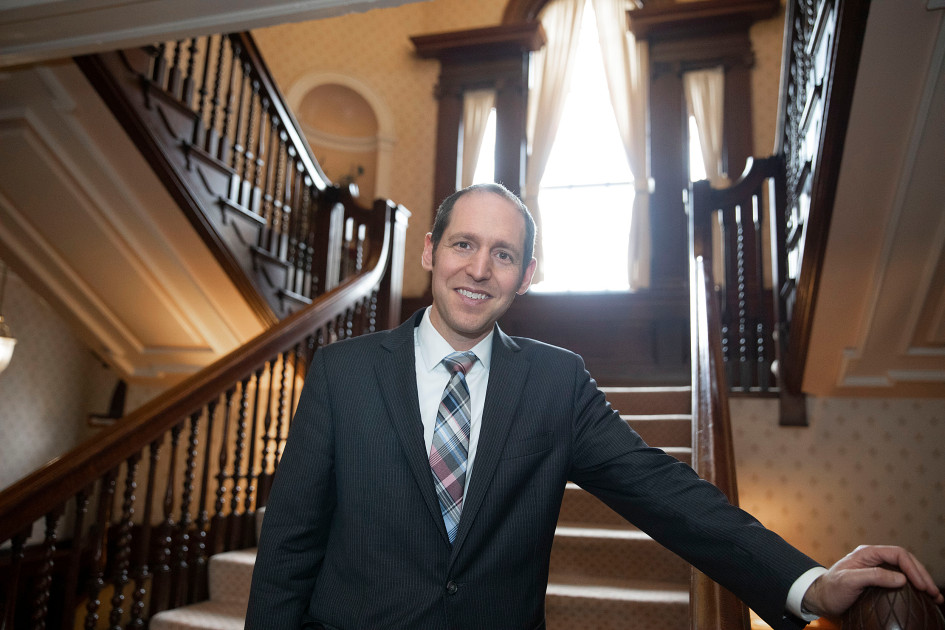 McLean Hospital psychologists are enlisting practices traditionally ignored as irrelevant to mental health care — religion and spirituality — as new allies in a program that blends them with counseling in patient therapy.

David H. Rosmarin, director of McLean’s Spirituality and Mental Health Program and an assistant professor of psychology in Harvard Medical School’s Department of Psychiatry, developed the program in 2017 after a hospital survey showed that 80 percent of patients found religion useful in dealing with stress and that more than half wanted religion to be part of their treatment.

The results indicated, he said, that religion and spirituality are not only potentially powerful forces in the emotional lives of many patients, but also that caregivers were missing an opportunity for healing.

“There’s been a very tense history between religion and psychology especially. … Freud thought of religion as a neurosis. He believed that the only reason somebody would gravitate toward something spiritual was because of an unconscious conflict they had not managed to resolve in a healthy way,” Rosmarin said. “As a result, the field tends to ignore what many of our patients are experiencing, which is a shame.”

To help fill the gap, Rosmarin developed SPIRIT — Spiritual Psychotherapy for Inpatient, Residential, and Intensive Treatment. Over the course of a one-year trial, funded by the John Templeton Foundation, nearly 1,500 patients voluntarily participated in SPIRIT group sessions, and more than 90 percent reporting getting something positive, including spiritual or religious resources helpful in their broader treatment. None reported negative effects.

For Caryn Mooiman, the SPIRIT program was a welcome offering during a recent weeklong stay at McLean. The 61-year-old nurse had her life upended this fall by a phone call from a woman claiming to have been her husband’s mistress. The call sent Mooiman into a spiral of depression.

“It just kind of shocked me and brought me to my knees,” Mooiman said. “I felt like I couldn’t deal with the pain of that situation, and I just wanted to die.”

Read More:  How to Create a Safe and Effective Strength Training Program for Pregnant Clients

Mooiman, an Episcopalian who regularly reads the Bible and prays, said the SPIRIT session left her with a greater feeling of peace and acceptance, one that has endured in the weeks since she left McLean in mid-October.

“It was very helpful,” Mooiman said. “In fact, I said to the woman [who led the SPIRIT session] that I wish that there were people like her out in the community that one could go to for spiritual therapy like you can go to psychotherapy.”

The pilot program, described recently in the American Journal of Psychotherapy (AJP), is offered as one of several therapies in the context of an intensive clinical environment.

The program grew out of the hospital’s efforts to evaluate diversity, with religion as one dimension explored. Once officials began looking, they found a significant unmet patient need.

“Most people are spiritual in some way, shape, or form and that impacts greatly their experience of emotional distress,” said Brent P. Forester, McLean’s chief of geriatric psychiatry, associate professor of psychiatry at Harvard Medical School, and a co-author of the AJP paper. “Not attending to that aspect of someone’s life in psychiatric care means that we’re not really thinking about assessment and care of people with mental illness in a holistic way. … We thought it was important to pursue this intervention.”

“Considering that for more than 100 years, religion and psychiatry have been at opposite ends of the universe, it’s pretty neat to be bringing them together at such a large scale within an academic psychiatry center.”

The results highlighted the field’s blind spot, Rosmarin and Forester agreed. Counselors are trained to assess patients’ families, work lives, sex lives, even military experiences, but religion is typically left out, Forester said. Courses on religion and spirituality aren’t required parts of clinician training, with the result that even skilled counselors can be ill-equipped to handle patients’ religious and spiritual beliefs.

Read More:  How to Create Your Own Strength Program

“There’s no required coursework at all,” Rosmarin said. “Most of the clinicians I’ve interviewed haven’t even had a single class — a 60-minute class — on spirituality and religion. It’s a whole domain of life and it’s just not discussed. It’s completely ignored.”

One doesn’t have to look far to recognize the opportunity for healing that is being missed, Rosmarin said. Alcoholics Anonymous (AA), with more than 2 million active members at any one time, is the single most widely used mental health treatment in the world, and is responsible for more than half of U.S. adults in recovery from alcoholism.

“The [third] step in AA is: ‘I give up control to a higher power,’” Rosmarin said. “The entire program is spiritually-based, from soup to nuts.”

SPIRIT is designed to give the clinicians presenting it a large degree of flexibility. It occurs in a group setting and the program’s protocols suggest that clinicians start each 30- to 55-minute session with a disclaimer that it is not intended as a platform for espousing religious beliefs or for conversion. The session then moves on to an opening question on the importance of spirituality to group members’ mental health.

The second half of the session relies on handouts developed by Rosmarin and colleagues intended to spark discussion and reflection on things like spiritual or religious beliefs, coping strategies, struggles related to faith or spirituality, prayer, forgiveness, and meditations on Judeo-Christian psalms or sacred verses from other faith traditions.

Though the session focuses on faith and religion, Rosmarin said, it’s important that clinicians understand the primary goal is not to better understand the tenets of a faith or strengthen relationships with a higher power, but rather on clinical improvement. SPIRIT is careful to avoid promoting particular religious or spiritual views and instead seeks to help patients identify resources that can help in their recovery.

“I think this is a great example of how nontraditional methods of supporting people with psychiatric illness are potentially beneficial,” Forester said.

The program has been used by patients with mood and anxiety disorders, acute and chronic psychotic disorders, substance-use disorders, post-traumatic and dissociative disorders, eating disorders, and mood disorders of older adults. Some patients whose stay at McLean is relatively brief — days to a week — only attend one group session, while those there longer can attend weekly.

The age range of those attending stretches from 18 to 92, and Rosmarin said he was surprised to find no age-related differences in reported benefits. Similarly, although 54 percent were on antipsychotic medication and 42.2 percent had reported suicidal thoughts, neither group reported higher or lower benefits than those not on medication or without suicidal thoughts.

Patients who reported being spiritual or religious — 77 percent of participants — were equally likely to benefit from the sessions. The 17.4 percent who were neither spiritual nor religious were less likely to report a benefit, though their average responses to a post-session survey showed they were “fairly” likely to get a benefit.

Now out of its pilot phase, the program reaches some 3,500 McLean patients a year, Rosmarin said. The program is easily transplantable and could be offered at other psychiatric hospitals around the country.

“Considering that for more than 100 years, religion and psychiatry have been at opposite ends of the universe, it’s pretty neat to be bringing them together at such a large scale within an academic psychiatry center,” Rosmarin said.