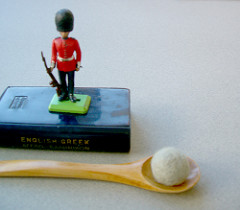 Why do some people succeed at learning a language and some people dont? As a person involved with running a mandarin language school it is my job to spend a lot of time to ponder this question. I have studied 4 foreign languages in my life. English (which you can see that I know), Spanish (which I still remember a few choice phrases from), German (which I have completely expunged from all memory banks) and Mandarin (which I am getting pretty good at). Why is that I failed miserably with German, did rather poorly with Spanish and succeeded with Mandarin and English? To me the answer is really clear. It fits in perfectly with data collected elsewhere. In fact I have never met anyone that has succeeded in learning a foreign language that did it in another way than I.

The fact about language studies that determine if you are going to succeed or not is with out a doubt the proportion of time you spend learning the language you spend with books as opposed to actually trying to speak it. Learning a language takes a lot a lot a lot of time. The complicated aspect of it such as grammar and conjugation and what not, probably makes up no more than a percentage of the whole task. The main thing is to learn a lot of new word. Learning a language by sitting down with a book is so dreadfully boring that most peoples brain give out when they try. I suspect that brain implosion is actually the most common cause of death of foreigners in China. When I think about trying to learn Mandarin by only using a textbook my thoughts immediately go off into the first book of the Hitchhikers Guide to The Galaxy series. The Vorlons, or whatever they are called, are about to read some poetry to the unsuspecting main character and his partner in crime. The author then jumps into the narrative and explains what usually happens when people are subjugated to Vorlon poetry. The most benign outcome of a reading is when the persons intestines actually jump out of the body of the readee and strangles them to death.

I cannot think of anything more soul destroying, that is not banned by the Geneva convention, than sitting down for like 3 years and learning Mandarin by studying it only. If ways to bore people was somehow weaponised by evil scientists (like the worlds funniest joke is in Monty Pythons world) Mandarin language studies mainly pursued with books would be banned by several international treaties overnight.

The thing about it that so agitates me is that some schools try to hammer the language into the minds of students using this way when there are so many much better options. Especially in the light of the fact that most people that try this way, never actually learn the language. The best way that a school can help a student learn a language is by helping them to a point where they can speak Mandarin outside of class as soon as possible. The success of the worlds largest language school franchise English First, now known as Education First, EF, is just cant be attributed to their learning material. From what I remember of it from my childhood as an EF student it was actually really boring. What they do do well is putting people in host families when they go abroad. Speaking to native speakers for an hour is probably worth a days worth of studies once you get past the basics.

The people that I know in China who speaks the best Mandarin has spent very little time in class rooms, they have learned Mandarin by pursuing the language outside of school. The way that schools helped them was combining personal content (the stuff they needed professionally and in hobbies) with the basic glue they needed to put the sentences together. The rest these students sorted out themselves.

Rui Ming works for a Chinese language school in China that is a great option for those that want to learn Mandarin. See the program overview page for more information about learning Mandarin.