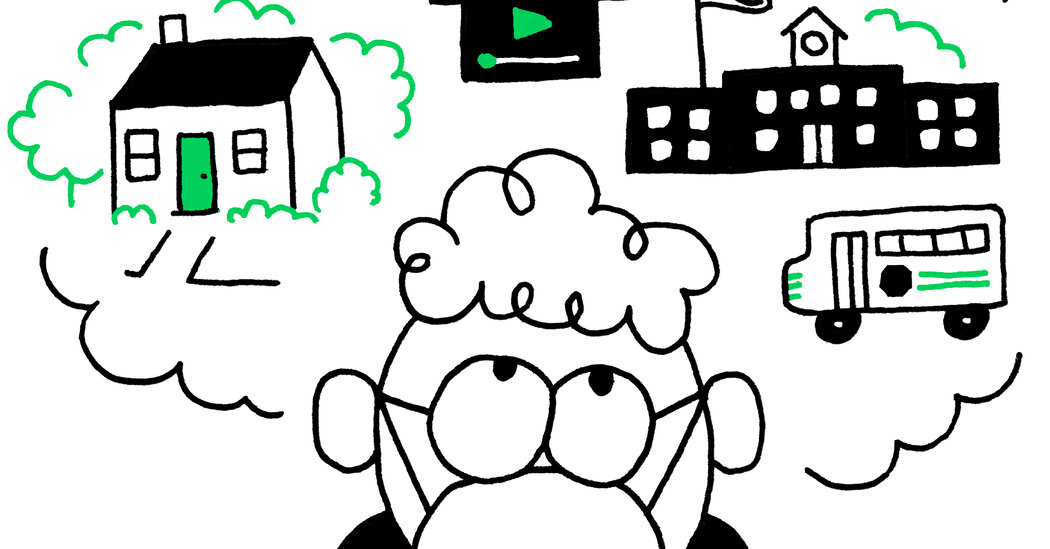 Even as some of the first schools open for the new school year, many public school districts across the country are still weighing their options for the fall. The constant uncertainty and reopening options — in-person, hybrid, remote — have left parents to figure out how they will manage another term of balancing work, caregiving and education. And according to Heather Hill, a professor of education at Harvard University, many areas haven’t taken the necessary steps to make learning accessible to all students remotely.

“In an ideal situation, yes, everyone would be safely back at school,” Dr. Hill said. “In the not-ideal-but-better-than-where-we’re-going situation, you would have a district that’s really stepping up” its remote schooling options.

“It’s just disheartening that we’re not there,” she added.

Shayla Griffin, who works in social justice education training for teachers and schools across Michigan, is one of many parents in a difficult position: She and her spouse are planning to oversee the remote education of their 5-year-old son while caring for their 2- and 3-year-olds — and trying to balance work. “We’re just kind of putting it together hodgepodge,” Dr. Griffin said. “If you’re not working, you’re on kid duty. We’re just going to make it work, which is a privilege, and it’s also a hot mess.”

So what are families doing if their children are not going back to school full time? Some have decided to withdraw from their local public school and enroll in private school, believing that private institutions are better equipped to safely bring students back to the classroom part time or full time, or at least to offer them a more enriching remote learning experience. (Of course, private schools are also grappling with how to proceed this fall.)

Others have turned to home-schooling rather than deal with the uncertainty of the school system. After all, the situation across many districts is changing rapidly; Chicago Public Schools, which had previously decided to implement a hybrid model, decided last week to go online-only. Some educators have noted, though, that this can ultimately hobble the funding sources of public schools, which receive resources based on their number of students. “Having a robust, highly funded, high-quality public school system is our best hope of having equitable outcomes for all kids, regardless of race and class,” Dr. Griffin said.

For the majority of parents, neither private schooling nor home-schooling is an option — either because they want to stay enrolled in their local public school or don’t have the resources for an alternative. Instead, they’re managing on their own or they’re finding other solutions for their kids and themselves. Here are a few of their strategies.

Read More:  How to boost your immune system: Five things you can do during the coronavirus pandemic

A “pandemic pod,” consisting of two to five families who create their own mini-classroom for their kids, can tick all the boxes that parents are looking for: education, socialization and rotating child care. Parents can either hire a tutor or take turns managing distance learning using their public-school curriculum, allowing the kids to interact normally while maintaining social distancing precautions everywhere else. Families are using pods for full-time remote or hybrid learning. One new model based on current infection rates by the University of Texas at Austin estimated pods of up to 10 students and teachers would substantially reduce the risk of an infected individual coming to class, compared to larger schools.

“If you can find a small group of kids that are going to be available in closer contact, learning some of the same things, now we’re starting to address some of the developmental things that kids are missing out on,” like resolving conflicts and sharing, said Lauren Knickerbocker, a child and adolescent psychologist at NYU Langone Medical Center.

While pods have earned some criticism recently for reinforcing racial and socioeconomic segregation, it’s possible to make them a bit more equitable. Some schools, like the Rooftop School in San Francisco, plan to organize pods themselves, to ensure all students secure spots. And Learning Pods, one of a handful of new services that help form pods and pair them with trained instructors, has been working on collaborations with public and private schools — in states like Virginia, Florida and New York — that are taking a hybrid approach this fall: On the days that students aren’t in the classroom, they would be part of a pod working on the teacher’s curriculum. The cost to families would depend on school funding and other grants. “They have that consistent, full-fledged education,” said Cate Han, a co-founder of Learning Pods and the founder of the Hudson Lab School in Hastings-on-Hudson, N.Y. “It also helps parents with the whole child care issue, which is a real struggle for so many.”

Seek out a community organization.

After months of operating socially distanced summer camps, many community-based organizations are stepping into the void left by shuttered school campuses. Across the country, Y.M.C.A.s are establishing in-person learning centers to help ease the burden on parents while allowing kids to play and socialize (with the appropriate safety measures, of course).

The Y.M.C.A. of Greater Houston, one of the largest in the country, is one such Y. At 11 locations across the city, kids can join a small class, with a counselor-student ratio of 1 to 9 (with a teacher on site), for normal school hours, from 8 a.m. to 3 p.m.; they do schoolwork first thing in the morning, break for lunch and then have an afternoon of summer-camp-like activities including crafts, games and sports. Aftercare is available until 6 p.m. for those parents who need it. “It’s the community stepping up,” said Stephen Ives, the president and chief executiveof the Y.M.C.A. of Greater Houston.

Boys & Girls Clubs and some local churches and child care facilities have introduced similar efforts, as have a few cities: San Francisco recently announced a plan to open new “community learning hubs” for the children of working parents.

Read More:  What face masks can you buy amid the coronavirus pandemic?

Remote schooling can feel really impersonal. Studies have shown students prefer live instruction over the prerecorded lectures that are frequently a part of virtual learning: “They can feel the teacher more present in their lives and that’s a real motivating factor for them,” Dr. Hill said.

For some, tutors can fill that gap. That’s why Rebecca Resnik, a psychologist and former special education teacher in Montgomery County, Md., sought out tutors in Chinese and math for her two school-age sons. “It just turned the titanic of them feeling lonely and kind of hopeless about school,” she said. Platforms like Wyzant or Tutor Matching Services can help find the right instructor.

Dr. Resnik also recognized that the resources available to parents could be overwhelming — especially for those whose children have mental health issues or special needs and require tutors with specific expertise. Her practice recently started to offer consults to help parents navigate the resources available for distance learning.

“It’s very hard, even in the best of times, when your kid’s having a problem, to figure out, how do you shop for the right kind of help,” she said. “We tried to get creative about making sure we weren’t leaving our families in the lurch.”

Some organizations are working to make one-on-one instruction available to kids for whom private tutoring might not be an option. Brown University in Providence, R.I., has begun piloting a program connecting undergraduate students with seniors at a nearby public high school for remote tutoring sessions; it will expand across the district this fall. “We really hope that it’s going to ease that burden, at least a little bit, for many families,” said Soljane Martinez, the education coordinator at the university’s Annenberg Institute for School Reform.

Since the spring, David Masias, of Los Angeles, has relied on his mother-in-law, Petra, to help with his daughter’s remote schooling. Rachel, now 12, has been studying Spanish intensively since the first grade; she’s close with her Spanish-speaking grandparents, who are deeply involved in the local Mexican community. “It helps her be more in touch with part of her culture,” Mr. Masias said.

Grandparents can also be a huge help for parents who can’t work from home. Anjie Juarez, a single mom who works full time in El Cajon, Calif., was looking forward to sending her son to middle school in the fall. Distance learning hadn’t suited him, in part due to his diagnosis of A.D.H.D. But last month, his school district reversed its decision to allow in-person learning. Fortunately, her mother can lend a hand, but “it’s parent guilt where you go, ‘I’m not going to be involved enough,’” Ms. Juarez said.

Older siblings, aunts, uncles, cousins and other family members may also be willing to chip in. (Still, some who would usually call on older relatives find they are unable to do so because of health risks or travel limitations.) Other communities are expanding the notion of family, too: Members of the New York and New Jersey food service workers’ union Unite Here Local 100, for example, have recruited fellow union workers who were laid off due to the pandemic to supervise kids.

Know that you’re not alone.

Regardless of the option they choose, parents are also turning to informal online networks as they decide how to proceed this fall. (The burden of managing remote learning, a recent poll by Morning Consult for The New York Times suggests, disproportionately falls on mothers.) An hour after the San Diego Unified School District announced it was closing in March, Allison Harris-Turk, an events and communications consultant and mother of three, made a Facebook group to share online resources and provide community, calling it Learning in the Time of Corona. Now, nearly five months later, the group has more than 16,000 members who trade tips and other intel.

“It’s just illuminated the fact that people are continuing to crave information, and more importantly, community,” said Ms. Harris-Turk, who has been able to adapt her work schedule to supervise her three daughters’ remote schooling. Some parents have also joined their parent-teacher associations to be a part of the discussions about how schools can better serve all students. Dr. Griffin suggested parents take small steps like figuring out how their schools are funded, and what they need to do to ensure their public school receives the funding attached to their child’s attendance.

“Reinventing the wheel is not 100 percent necessary,” said Shilpa Panech, a parent in Pleasanton, Calif., who runs three child care facilities and plans to place her kindergartner, fifth grader and seventh grader in pods. “There are a lot of options out there for people who are very overwhelmed by this whole process, and there’s a lot of support.”