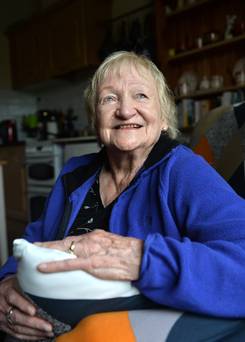 Having grown up in Stillorgan in Dublin, Maura, 86, spent most of her life in the US, where she worked in IT. It was on a trip home that she fell in love with Clifden and decided that if she ever had the chance she would retire there. She describes the retirement village where she lives as “wonderful” and says it’s like being part of a small community where people look out for one another.

“My days are never long enough. I get up at 6am every day – I always have. I feed the cats and the birds. I sometimes take art lessons or go on day trips. I intend to still be learning when I exit the planet. I love to sew, crochet and knit. I love to go to Dublin or Limerick – I just hop on the bus,” she says.

Maura is still open to dating. “I’ve never been lonely in my life. I was married three times but I never had children. What you don’t have, you don’t miss.”

A four-minute walk from her apartment takes her to a local hotel with a swimming pool where she can be found regularly. However, she says the ocean is still warm so she’s planning a few more sea swims this year.

Asked about the secret to her energy and enthusiasm for life, she says her positive disposition and thinking of other people are her recipes for a happy life into older age.

“I don’t think of age at all. Yes, you can look at yourself and your wrinkles and think ‘that’s terrible’ but people are too busy looking at their own wrinkles to care. We’re all in the same boat,” says Maura.

“If you’re good to yourself, you’ll always be good to others. It’s important not to always find fault in others.”

Asked about her plans for the future, Maura says she’s going to keep doing what she loves and hopes to renovate her apartment shortly.

Maura’s positivity is the epitome of the attitude to ageing being celebrated by Positive Ageing Week, which starts today and features events are taking place around the country.

Age Action Ireland is asking individuals and groups nationwide to organise and register an activity or event which highlights and celebrates the older people in our lives and the contribution they make to our families and our communities.

“It doesn’t matter how old you are – you can take part in an activity this week. Age is not a barrier. There are activities going on in every county,” says Age Action’s Billy O’Keeffe.

Another great example of people refusing to let age hold them back can be seen with a trio of Corkmen who are involved in an amazing project: filming the stories of older people in their area as a resource for the future and a wonderful keepsake for their subject’s families.

The work being done by Paddy Buckley (72), Paddy Tobin (78) and Paddy McAuliffe (74) has become so popular that they can’t keep up with demand.

The trio spend several days of the week together filming their interviews, sourcing background material and editing the final product.

READ MORE: 10 tips to stay active as we age and enjoy it as well

‘The three Paddys’, as they are affectionately known locally, recently won the ‘Hobbies on the Net’ category in the Age Action ‘Silver Surfer’ award and are acting as ambassadors for this year’s Positive Ageing Week which runs this week.

They know the benefits of life-long learning, having projects to work on in retirement, and friendship. All three of these things flowed into their lives following a course they did on filming and digital editing in Duhallow’s Integrated Rural Development Company.

Paddy McAuliffe (74), who lives between Mallow and Kanturk with his wife Marie, retired from Irish Sugar in 2010. A father of three, he signed up for the ‘Memories through Media’ course the year after he retired.

There were 17 people in the class, and he and his fellow students got tuition, over the course of two years, in how to shoot short films and edit them.

The first short film they produced told the story of four nuns who came back to Ireland after serving overseas all their lives. After that they approached a number of older people to get their memories collected on film, talking to them about their school days and their lives today.

Afterwards the three men meet at Paddy Buckley’s house to do the editing work. “We could meet three of four times a week depending on what’s happening. We’d also cover some local events or anything that’s happening locally,” says Paddy Buckley.

Read More:  This Med Ball Toss Is the Toughest Way to Tag Team a Workout

Over the years of their collaboration, the trio have built up a huge film resource of events covering everything from plays to exhibitions and the odd sporting occasion thrown in for good measure.

“The advantage of three people working together is we have two cameras. Paddy Buckley and I do the filming and Paddy Tobin does the interviews. We also get on very well together,” Paddy McAuliffe says.

The projects they work on are labours of love, and all three are insistent that it only works because no money changes hands. “We enjoy it and if it looks well and it’s the best we can do, that’s enough. I’d love to be doing this as long as I can,” Paddy McAuliffe says.

At his home in Cecilstown Paddy Tobin (78), who worked in the plant hire and construction industry, describes the memories project as a wonderful second act. The grandfather of five can’t believe how much people love the work they do.

“It just took off and it was amazing. I do the interviewing,” says Paddy, who is married to Ann. “We start with where the person was born and reared, where they went to school and then right through life. We let the people do the talking. When they mention something in the interview, pictures of that come up in the film. We take their family pictures and scan them, then we edit it and put is on a reel.

“People are absolutely thrilled. Sometimes people are nervous at the start but after a few minutes a bit of craic starts. We let people tell their own story.”

Paddy recalls that when they started doing the course, they were reminded that retirement was a time to find another string to their bow and to keep their minds active and engaged.

“What we do is most enjoyable. We’re occupied and it’s very satisfying. We get out and about and we are great friends. We don’t charge for what we do – we don’t need the money, as our families are reared. We’re not wealthy but we don’t need it,” he says.

“I was all my life driving bulldozers. What I’m doing now is the total opposite and it’s marvellous – we have a great time. Any one of us won’t do anything without the other two. We come as a trio.”

Read More:  High levels of engagement in care by children and young people with HIV in the UK and Ireland

The three men each spent around 46 years of their lives at work, and Paddy Tobin says they were all used to getting up in the morning and going out to a busy job. “All of a sudden work stops and you could find yourself with nothing to do. This is actually another life,” he says.

READ MORE: Super gran: ‘What else am I to do – watch TV and eat sweets?’ says world champion runner Ann (80)

The baby of the trio Paddy Buckley (72), from Banteer retired almost ten years ago from his job as the director of EPS, a water treatment company in Mallow.

Married to Noreen, with four children, Paddy has long had an interest in film-making, buying an old camera back in the 1960s and a home video recorder in the late ’70s.

His family were heavily involved in car rallying and he spent a lot of time capturing footage of their exploits. He was particularly keen to learn editing skills on the course in Duhallow. He never expected the course would lead to great friendships too.

“One of the first people we interviewed was a lady who had been involved in the Red Cross in Mallow for years. It was after that we came up with the idea of doing all this,” he explains.

“It’s a hobby. No money changes hands – this is not about money. We don’t want any reward. I feel we are better off this way as it occupies our time. We are almost busier now than when we were out working.”

While the work of getting the interviews on film is serious business, the trio have great fun when they gather for the editing process. “We’d have different opinions but if you don’t differ you’d never do anything. We enjoy ourselves,” says Paddy Buckley.

According to Paddy, retirement is a time to look at your options and do something different. “There’s plenty of things people can do. You can’t just sit in a corner. If I sat in a corner I’d be gone in no time,” he says.