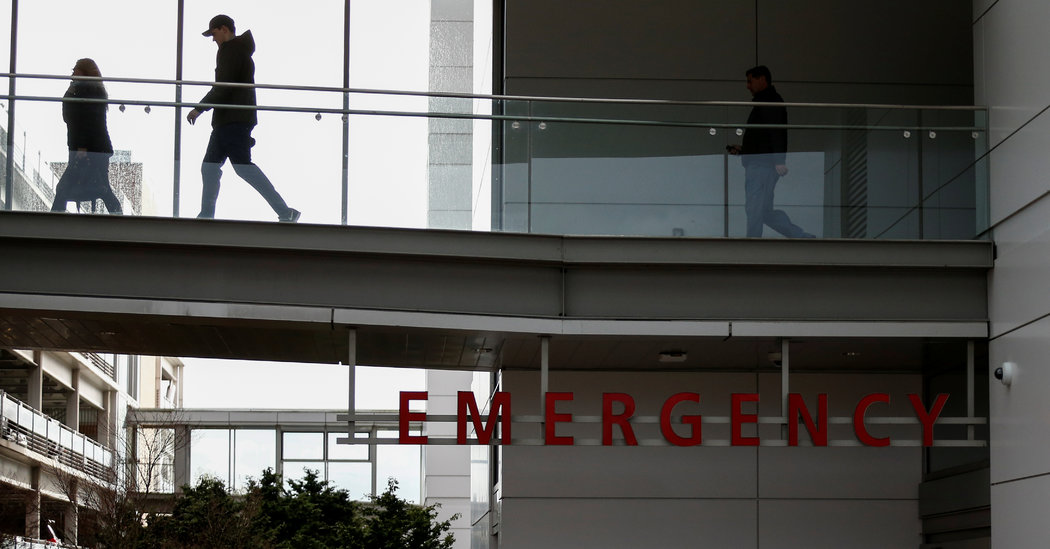 With an intense flu season in full swing, hundreds of thousands of coughing and feverish patients have already overwhelmed emergency rooms around the United States. Now, hospitals are bracing for the potential spread of coronavirus that could bring another surge of patients.

So far, only a dozen people in the United States have become infected with the novel coronavirus, but an outbreak could severely strain the nation’s hospitals.

“We’re talking about the possibility of a double flu pandemic,” where a second wave starts before the first is over, said Dr. Eric Toner, a senior scholar at the Johns Hopkins Center for Health Security.

Public health experts are also closely watching reserves of vital medical supplies and medications, many of which are made in China. Some hospitals in the United States are already “critically low” on respirator masks, according to Premier Inc., which secures medical supplies and equipment on behalf of hospitals and health systems. And China is the dominant supplier of the raw ingredients needed for penicillin, ibuprofen and even aspirin — drugs taken daily by millions of Americans and dispensed routinely to hospital patients.

“All the hospitals are taxed with a large flu season and other bugs,” said Dr. Mark Jarrett, the chief quality officer for Northwell Health, which operates 23 hospitals across Long Island and elsewhere in New York. About 400 patients are coming to its emergency rooms each day with flulike symptoms.

“Everybody is at maximum capacity,” Dr. Jarrett said.

Northwell activated its emergency operations center earlier this month in response to concerns that the virus, now in epidemic proportions across China, could become a pandemic, similar to the hospital system’s reaction to the threat of swine flu in 2009 and Ebola in 2014.

Although the Trump administration declared a public health emergency for coronavirus late last week, Dr. Robert Redfield, the head of the Centers for Disease Control and Prevention, stressed on Friday at a news briefing that the risk for Americans was still low. Hundreds of people who returned to the United States from Wuhan have been quarantined at military bases, and others possibly exposed have been asked to self-quarantine or stay at home.

But Dr. Redfield also said that officials were beginning to actively discuss what other steps would have to be taken in the event that the new coronavirus spread in this country. Asked about emergency funding, Alex M. Azar II, the secretary for health and human services, said he did not believe agencies required additional funds right now.

Still, across the country, hospitals are taking steps to prepare for the potential threat.

Some are already scrambling to find sufficient supplies of medical face masks, especially so-called N95 respirators, which are more effective for preventing infection. Manufacturers are struggling to keep up with global demand and the desperate need for supplies in China.

Read More:  What hospitals and health systems can do to recover financially from COVID-19

The mask shortage highlights just how dependent the United States health care system is on goods from China. Premier was told last week that a Taiwanese factory it had a contract with was halting shipments to the United States. In addition, Chaun Powell, the group vice president of strategic supplier engagement for Premier, said masks that are made in China are being diverted for use there. As a result, “there’s not as much supply to ship,” he said.

Hospitals in the United States have also increased their requests, he said, adding that orders for respirator masks in the first five days of February had completely outstripped the demand for a typical month.

“We’re trying to get as many masks as we can, as is everybody else,” Dr. Jarrett of Northwell said.

On Friday, Dr. Stephen Hahn, commissioner of the Food and Drug Administration, said the agency was closely monitoring the supply chain from Chinese pharmaceutical and medical supply factories, but said the F.D.A. had received no reports of disruption so far.

Many of those factories closed during the Lunar New Year holidays and remained closed for additional days..

“Many of us are holding our breath to see the downstream effect on pharmaceuticals and other medical supplies because of this outbreak in China,” said Dr. Paul Biddinger, who helps oversee emergency preparedness for Partners Healthcare, the Boston hospital group that includes Massachusetts General.

Experts like Dr. Toner say supplies could easily become depleted, especially at smaller hospitals that tend to have less inventory of basic items like masks, gowns and gloves. Hospitals have long struggled with shortages of injectable medications and staples like saline. In 2017, Hurricane Maria knocked out power to several pharmaceutical factories in Puerto Rico, leading to a shortage of saline bags.

Hospitals will “burn through their supplies very quickly if there are a lot of these patients,” Dr. Toner said.

Some hospital executives downplayed concerns. “This is something we have a tremendous amount of experience with,” said Dr. Paul Stefanacci, the chief medical officer for acute care of Universal Health Services, a for-profit hospital chain. His company has increased its orders of supplies by 10 percent to handle any uptick in patients.

David Gillan, senior vice president of sourcing operations at Vizient, another purchasing group, described the supply chain as strained, and said he worries about too much “anticipatory behavior,” such as hospitals ordering more than they need.

Public health officials are also watching whether the shutdown of manufacturing plants could lead to shortages in a wide variety of drugs containing active ingredients made in China. Some drug makers reported that their facilities had reopened this week. But even temporary delays in manufacturing — or problems transporting materials — could lead to problems, some experts said.

“A number of companies are panicking, for sure,” said James Bruno, a consultant who advises small and midsize drug makers on manufacturing issues. “Especially the smaller ones who don’t have the wherewithal to have backup suppliers.”

Allen Goldberg, a spokesman for the Association for Accessible Medicines, a generic industry trade group, said companies typically have several years’ worth of supplies of ingredients and that there were “redundancies built into the system.”

Rosemary Gibson, an expert on China’s drug supply who is a senior adviser at the Hastings Center, a nonpartisan bioethics research institute, said she had learned of companies having trouble getting shipments of their products. “If there were exports from China that were no longer coming to the U.S., our hospitals and our health systems would cease to function within a couple of months,” said Ms. Gibson, who also wrote a book, “China Rx,” about the American dependence on medicines from China.

The United States has already seen examples of how quickly a disruption in supply from China can lead to shortages. In 2018, widespread recalls of the blood pressure drug valsartan were traced to problems at a single Chinese factory that made the drug’s active ingredient, which was contaminated with a possible carcinogen.

In 2016, a chemical explosion at a raw ingredient factory in China led to a global shortage of piperacillin-tazobactam, an antibiotic used to treat a number of life-or-death conditions, including sepsis.

About 20 F.D.A. employees assigned to the agency’s offices in China, and who were responsible for product inspections there, have been evacuated.

“It will be some matter of time before we understand what the disruptions are,” said Michael Wessel, a member of the U.S.-China Economic and Security Review Commission who has studied the growing reliance by the United States on Chinese pharmaceutical products.

Read More:  The US is throwing away at least 3,500 donated kidneys every year, study finds

Meanwhile, hospitals are training their staffs and circulating the latest guidance for screening patients and limiting the spread of the virus. At CommonSpirit Health — a large Catholic hospital system with 142 hospitals created through the merger of Dignity Health, based in San Francisco, and Catholic Health Initiatives, based in Chicago — patients and staff members are being instructed on how to distinguish coronavirus from the flu. It has already embedded screening questions in its electronic health records.

“It has not impacted our facilities at this time,” said Roy Boukidjian, vice president for infection prevention for CommonSpirit.

Learning from a 2014 experience with Ebola when two nurses in Dallas were infected while caring for a patient, hospitals understand they need to actively prepare their medical staffs for an influx of cases from a contagious disease, instructing them on how to safely put on and take off clothing and other protective equipment, said Julie Fischer, an assistant professor of microbiology at Georgetown University. “Personnel were not trained, systems were not tested,” she said. “That’s where the breakdown happened.”

Health care workers are always at high risk, and the death of a doctor treating patients in China reinforced the dangers.

Some nurses say they are better prepared now to protect workers. “We all went through the Ebola virus a couple of years ago,” said Barbara Rosen, an official with Health Professionals and Allied Employees, a New Jersey union. “For this round, everything seems very prepared.”

But Bonnie Castillo, the executive director of National Nurses United, which represents roughly 155,000 nurses, said some hospitals may not be fully prepared.

“Our concern is that there is inadequate planning and training and also just basic staffing,” as well as the availability of supplies that protect nurses and patients from infection, she said.

Because the nature of the virus is still unknown, public health officials said it’s unclear what future challenges hospitals will face if the coronavirus spreads into an epidemic in the United States. While the current government guidelines call for patients to be treated in specialized isolation rooms, experts say it is unlikely that there will be enough isolation rooms at individual facilities.

And to manage the health of patients with severe respiratory illnesses, which coronavirus can cause, hospitals may find themselves without enough beds in their intensive care units or sufficient ventilators and other breathing equipment.

“If it’s a pandemic, it’s going to stretch our resources very thin,” said Nicole Errett, a researcher at the University of Washington School of Public Health.