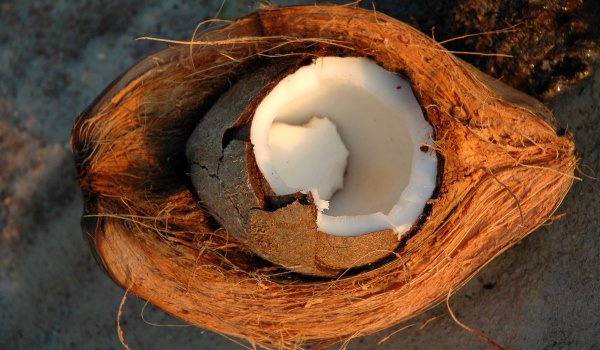 Did you know that coconut does not just make up pina colada, it can also be used to provide protection for coastal areas?

Coastal areas, which serve as a hub of economic activities and human settlements, are in dire condition. This is a result not only of human activities such as mangrove cutting, sand mining and infrastructure but also climate change.

Climate change can affect coastal areas in many ways, from rising sea level and ocean temperature, to emitting greenhouse gas emissions. It can also lead to coastal erosion, flooding and water pollution.

Having said that, coastal protection is supposed to be one of the priorities in climate change mitigation.

Generally, coastal protection from erosion uses solid structures, such as concrete sea walls, breakwaters, groins and jetties, among others. Coral reefs, mangroves or seagrass can also protect the beach from strong waves.

However, concrete sea walls are expensive to build and local governments often do not have the budget to build one in their areas.

So, inspired by coastal bio-engineering applied in the US, we – me and five colleagues at the Oceanography Program of Bandung Institute of Technology – modified coconut husks as an alternative material to build a sea wall.

Our first pilot project was at Karangjaladri village of Pangandaran Regency, around six hours’ ride from Bandung, the capital city of West Java. Karangjaladri’s coastline span around 5 km and located near the beach but didn’t have any coastal protection when we first arrived in 2017. The area is prone to abrasion due to high ocean waves and sloping beaches.

In 2018, we returned and involved local people in building a sea wall made of coconut fibre, a cheap biodegradable material that’s abundant in the area. Because of its organic nature, the coconut-husk sea wall can turn into a coastal greenbelt to help preserve the marine ecosystem.

But coastal areas of Indonesian islands are in bad shape because of human activities, such as coral and sand mining and mangrove logging, to house settlements beyond the coastline.

On November 2018, with the support of Karang Jaladri villagers at Pangandaran beach, we installed the first 20 metres of sea wall.

We built the wall by rolling up coconut husks into rolls of 25-50cm diameter, which are tied up with 5-10 metres of nets.

We avoided the west monsoon and east monsoon seasons to install the sea wall. These two seasons have the strongest winds, which would make it difficult to set up the nets. We also considered the wind pattern, height and direction of ocean waves and currents to be able to set up the nets along the coastline without nature interrupting.

The coconut husk sea wall has some weaknesses. It has limited capability to subdue strong ocean waves, unlike concrete walls. Hence, we need to install the wooden pegs correctly for them not to get swept away by ocean water.

Though there are other mitigation efforts to tackle the physical damage resulting from wave erosion, the environmentally friendly approach can be considered an alternative and cheaper method.

Materials to make biodegradable sea walls, such as coconut husks, are cheap and easy to find at the coastline, especially in Indonesia.

We also reuse nets from local fishers to reduce the costs. Rather than nets and coconut fibre piling up as waste, we collected them and turned them into parts of the sea wall.

So, aside from protecting the coastline, we also help to make use of organic waste.

The idea of the pilot project is to encourage local people to make use of everyday materials to protect their areas. Instead of waiting for the government to build concrete walls costing billions of rupiah, which more often than not is the government’s priority, villagers can install their own.

If you believe in the work we are doing here at The Good Men Project and want to join our calls on a regular basis, please join us as a Premium Member, today.