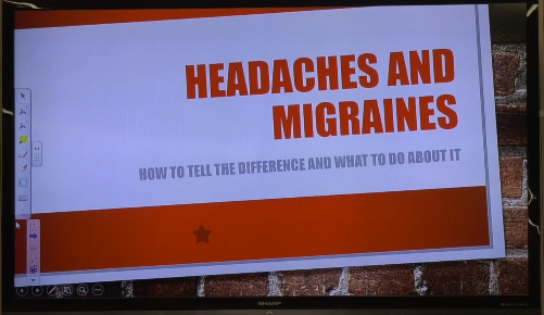 FAIRBANKS, Alaska Last night’s Healthy Living Lecture at UAF explained the difference between a headache and a migraine. From an outward perspective, these two conditions seem to be the same thing, a sharp pain felt along the scalp. In reality, they are very different. Dr. Joshua Costello, of Alaska Brain and Spine, says headaches, when compared to migraines are more of a dull and achy body pain. Poor posture, dehydration, chewing wrong, and even lower back pain can cause a headache. Migraines, however, are more complex.

“Usually it’s unilateral,” began Dr. Costello; “on one side of the head, and comes with a lot of other neurological symptoms.”

The symptoms of migraines can also get more severe than headaches. In Dr. Joshua Costello’s lecture, he spoke on the Autonomic Nervous System, an unconscious part of the body that controls functions like heart rate, digestion, respiratory rate, and blood flow. A lot of migraines are caused by this system malfunctioning.

“When your brain is trying to deliver to a particular type of tissue in your body, and that fuel delivery doesn’t go the way it’s supposed to, or you can get vasoconstriction or dilation blond vessels in particular places, which causes pain,” said Dr. Costello.

Migraines affect many people, with it being the third most common illness in the world. 1 in 7 people experience this pain. With this being caused by a dysfunction in the nervous system, severe migraines can be passed genetically. One thing sufferers may not know, is that migraines are avoidable. There are three inputs that influence the autonomic system; movement, perception, and bodily interaction. Dr. Costello says that by changing these aspects of our lives, we can alter this system and stop the migraines.

“Basically it’s going to be a really awesome excursive routine, that’s going to be specific to the person.” started Dr. Costello. “It might also include a really customized diet. It also would include, probably some form of mindfulness exercises.”

Dr. Costello also says that migraines are not just limited to the head. You can also experience migraines in your eye, your neck, and even as low as your shoulder.