A new osteoporosis drug that can re-grow older women’s bones as fast as a teenager’s develop was approved by the Food and Drug Administration (FDA) on Tuesday.

An estimated half of women in the US will break a bone due to the devastating bone-loss disease that turns limbs brittle.

They are more at-risk than men because estrogen is key to bone development, but women’s estrogen levels drop dramatically after going through menopause, raising their risks of breaking a bone and, in turn, of an early death.

Now, the new injection drug, called Evenity (romosozumabaqqg), promises to encourage bone reconstruction and reduce the risk of devastating spinal fractures by up to 73 percent, the FDA announced. 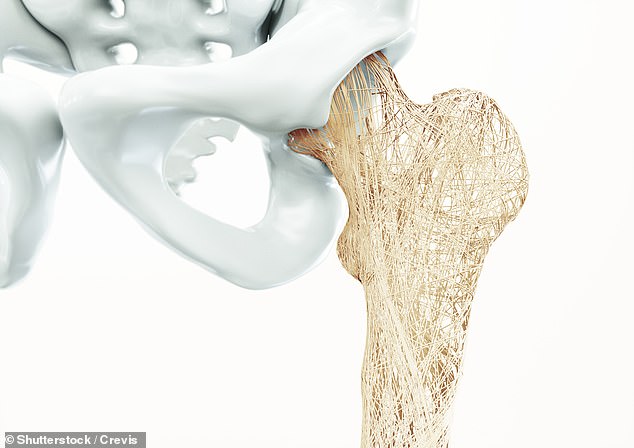 A newly-approved drug called Evenity regrows porous, deteriorating bones for older women with osteoporosis and could make their spines up to 15 percent stronger

Evenity is currently only approved to treat women who have gone through menopause and are at high-risk of bone fractures or cannot take other osteoporosis drugs.

In other words, it’s a Hail Mary treatment that has the incredible ability to re-build bones.

And this could be life-changing – and life-extending – for older women.

As we age, none of our cells maintain the same ability to replicate or repair themselves that they had when we were young.

Bone cells in particular grow at break-neck pace in our childhood and adolescence.

By the time a person reaches 18, they already have 90 percent of the bone mass they will accumulate over the course of their lives.

Throughout our lives, we are developing new bone tissue while losing older bone to resorption. After age 30, we are losing bone faster than we make it.

Women’s bone density losses accelerate dramatically after menopause, which occurs between ages 45 and 55, on average.

Once a woman’s ovaries slow down and eventually stop functioning, her body stops producing as much estrogen, and her levels of the hormone plummet.

Estrogen plays a key role in bone growth, because it encourages the development of bone precursors called osteoblasts and keeps the catalyst for scheduled bone cell death in check.

Up until 2017, doctors recommended estrogen therapy (which many women take to alleviate the symptoms of menopause any way) to treat osteoporosis.

But in recent years, scientists discovered that many of the women for whom data said hormone therapy reduced fracture risks did not in fact have osteoporosis – they were just at-risk.

As it turned out, estrogen therapies offered little to no benefit to women with confirmed osteoporosis, and the drugs were raising their breast cancer risks.

Until Tuesday, there were four commonly prescribed osteoporosis drugs.

Two of them may have the potential to rebuild bones, but the gains are limited and the risks associated are rather high. The other two drugs simply slow down bone loss.

But Evenity’s primary function is to rebuild bone, at a pace comparable to what doctors expect to see in teenagers.

The drug is injected in two doses, given one right after another, at a time. Patients can have up to 12 doses.

It woks by blocking the effects of a protein called sclerostin.

Sclerostin keeps our bones from over-growing – but in older age, this is not as important as having enough bone to keep our skeletons strong.

Compared to another common treatment, Evenity lowered the risk of spinal fractures by 36 percent, a significant improvement.

But, as biopharma news source Endpoints News notes, the drug didn’t appear to do much prevent other fractures, like those occurring in the wrist.

It also comes with a box warning about considerable cardiovascular risks. Those who have recently had heart attacks or strokes won’t be eligible for the bone-building drug.

And after more than 12 doses, the drug could lead to a dangerous build-up of excess calcium, so it will only be used for short-term treatments.

Still, it is the first drug specifically designed to give back the bone that time and menopause have taken away from older women.

‘Today’s approval provides women with postmenopausal osteoporosis who are at high risk of fracture with a new treatment that will reduce this risk,’ said Dr Hylton Joffe, director of the Center for Drug Evaluation and Research’s Division of Bone, Reproductive and Urologic Products.

‘But Evenity may increase the risk of heart attack, stroke and cardiovascular death so it’s important to carefully select patients for this therapy, which includes avoiding use in patients who have had a heart attack or stroke within the previous year.