Father, 42, saves his seven-year-old son’s life by performing CPR when a cardiac arrest left the youngster ‘dead for 15 minutes’

A schoolboy who died for 15 minutes after having a sudden cardiac arrest only survived due to his father’s CPR skills.

Tommy Plant, who is just seven, collapsed at home in Birmingham on January 19 after his heart stopped.

The youngster’s quick-thinking father Jason Plant, 42, performed CPR on his son for six minutes before paramedics arrived at the scene.

Despite Tommy being clinically dead for 15 minutes, doctors were able to restart his heart but warned his parents the youngster may never walk or talk again.

Following 16 days in hospital – and three in a medically-induced coma – the youngster was discharged and defied the odds yet again when he walked out.

Scroll down for video 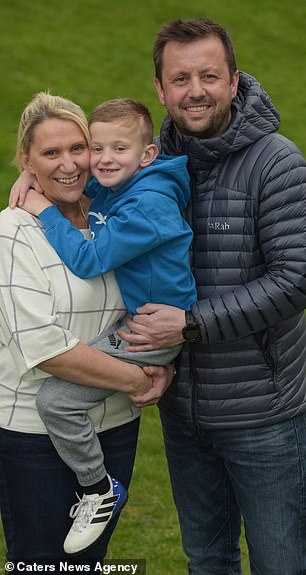 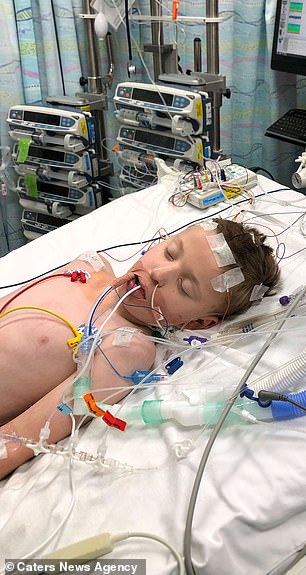 Tommy Plant died for 15 minutes after having a sudden cardiac arrest and only survived due to his father’s CPR skills. The seven-year-old is pictured left after the ordeal with his parents Jason and Alison Plant. Tommy is pictured right on the day of his cardiac arrest at Birmingham Children’s Hospital. Doctors warned his parents his hopes of surviving were ‘incredibly slim’

Tommy’s mother Alison Plant, 41, woke her son up that Saturday morning, with him being fine aside from a minor cough and cold.

Mr Plant – a father-of-four – said: ‘Just minutes after being downstairs he turned grey, at that point Alison called 999 for help.

‘I was at the shop when she rang and I ran home – I knew straight away something was horrendously wrong.

‘He looked like he’d had a big shock, he was pale, sweating and becoming unresponsive.

‘I pleaded with him to say “daddy”, to squeeze my hand – he managed it to begin with but I knew he was getting worse.’

Mrs Plant called for an ambulance again while her husband – who has basic first-aid training – attempted CPR.

‘He wasn’t breathing and his arms were rigid, the phone operators were talking me through CPR on the phone,’ Mr Plant said.

‘It could have only been two minutes, but it seemed like forever.

‘I was so scared, it was unbelievable – it felt like my world was falling apart.

WHAT IS A CARDIAC ARREST?

A cardiac arrest occurs when the heart suddenly stops pumping blood around the body, which is usually due to a problem with electrical signals in the organ.

This causes the brain to be starved of oxygen, which results in sufferers not breathing and losing consciousness.

Cardiac arrests are different to heart attacks, with the latter occurring when blood supply to the heart muscle is cut off due to a clot in one of the coronary arteries.

Drug overdose and losing a large amount of blood can also be to blame.

Giving an electric shock through the chest wall via a defibrillator can start the heart again.

In the meantime, CPR can keep oxygen circulating around the body.

‘It was terrifying – Tommy was just about clinging to life when the paramedics arrived.’

After being rushed to Birmingham Children’s Hospital, Tommy’s parents were warned he might not make it.

‘We were told his chances were incredibly slim,’ Mr Plant – who works in telecommunications – said.

‘He was put in an induced coma for 72 hours and we were told he might not walk, talk or remember you.’

Against all odds Tommy pulled through but still suffers the emotional effects of his ordeal.

‘The other day, he saw an ambulance and panicked, hoping that they’re not for him,’ Mr Plant said.

‘I have to reassure him – his heart is better and there’s been no real damage but everyone has been a bit dumbfounded by it.’

Even doctors have been unable to explain exactly why this health scare occurred.

‘When the cardiologist came from Great Ormond Street in London, he was baffled,’ Mr Plant said.

‘There was nothing to suggest Tommy may have been at higher risk from a cardiac arrest.

‘It just shows anyone can have a cardiac arrest’.

Tommy has recovered well and is back to playing his beloved football. However, his father worries about the youngster’s future.

‘He’s now playing all the time, loving watching the football and all the things he did before, but I am concerned it’s all be too much,’ Mr Plant said.

The family are speaking out to raise money for Birmingham Children’s Hospital. Donate here. 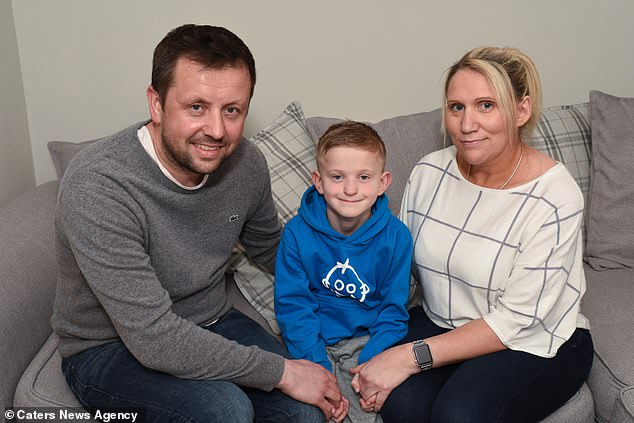 Tommy defied the odds to survive after spending 16 days in hospital and three in a medically-induced coma. Pictured after the ordeal with his parents, the youngster was never expected to walk or talk again if he did pull through. He walked out of hospital less than three weeks later 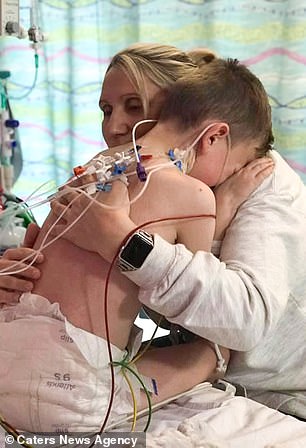 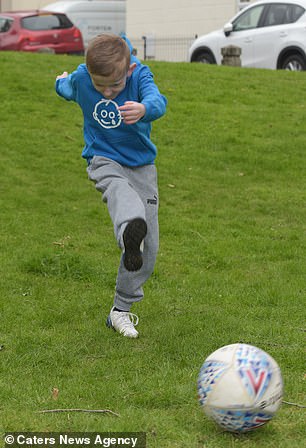 An emotional Tommy is seen left being comforted by his mother as he recovers. The youngster is back to playing football (right), however, his father worries about his future 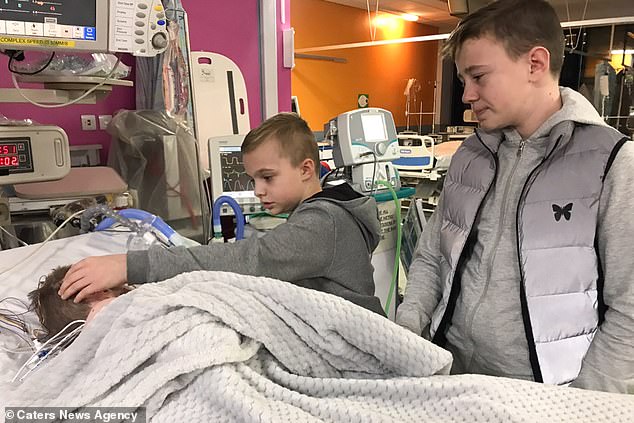 Tommy’s brothers Ben, 10, and Harry, 14, are pictured visiting him in hospital. The siblings – along with their brother George, 17 – watched on in horror as Tommy stopped breathing