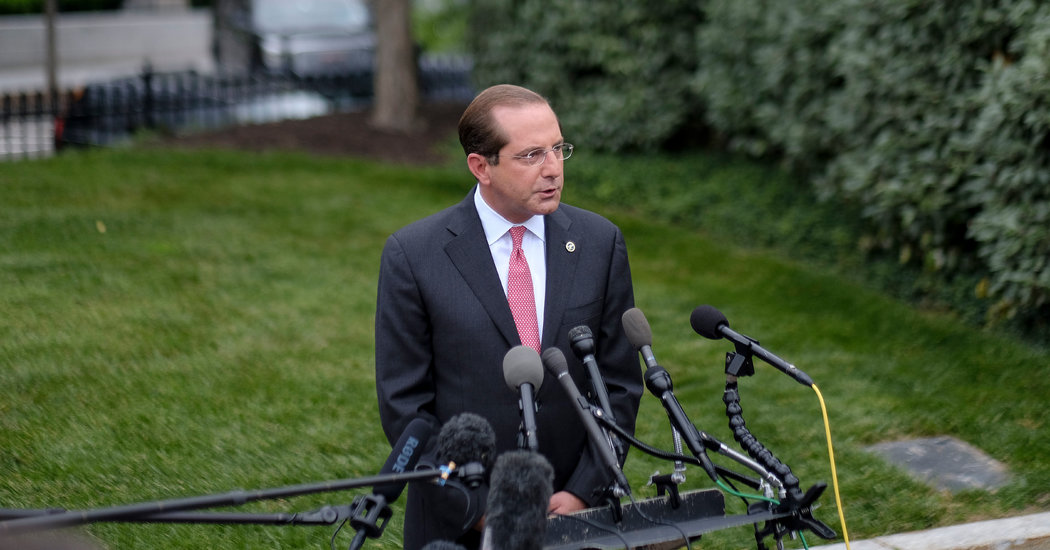 WASHINGTON — The Trump administration for the first time will require pharmaceutical companies to include the price of prescription drugs in television advertisements if the cost exceeds $ 35 per month.

The move, announced on Wednesday by Alex M. Azar II, the health and human services secretary, is the most visible action the administration has taken so far to address the rising cost of prescription drugs. It has been a key issue for American voters and one that both Republicans and Democrats have vowed to address.

The proposal could be challenged by the drug industry, which argues that revealing the list price will confuse consumers and could violate the companies’ First Amendment rights. While the list price of some drugs can be thousands of dollars a month, patients with insurance that covers their prescriptions frequently pay far less, often less than $ 50.

In ads, drug companies have been required to provide a list of potential side effects. Under the new guidelines — expected to take effect this summer — all direct-to-consumer television advertisements for drugs covered by Medicare or Medicaid must include the list price, also known as the wholesale acquisition price, in their ads, Mr. Azar said.

A disclaimer will also state, “if you have insurance that covers drugs, your cost may be different,” according to officials at the Department of Health and Human Services.

Drug makers must update the price they disclose every quarter, which will be the product’s monthly cost or the price for a course of treatment if it is not a chronic medication. The disclosure must be in “legible” text at the end of the advertisement, much like the list of side effects.

The move has been pushed by patient advocacy groups, which have complained that televised drug ads — amounting to about $ 4 billion of the $ 5 billion spent by the industry on product promotion — steer patients to high-priced medications or drugs they do not need.

Many of the most heavily advertised drugs cost thousands of dollars per month. Two dosing pens of AbbVie’s Humira, which treats rheumatoid arthritis and other conditions, have an average retail price of $ 5,684, according to the website GoodRx, which tracks drug prices. Another frequently advertised drug, Xeljanz, a Pfizer arthritis medication, costs about $ 4,840 a month.

The measure was applauded by Senators Richard Durbin of Illinois, a Democrat, and Charles Grassley of Iowa, a Republican, who together have tried to pass similar legislation. “Direct-to-consumer prescription drug advertisements are everywhere, and they tell you just about everything imaginable about the drug, other than its price,” the senators said in a joint statement. “We believe American patients deserve transparency.”

The drug industry has pointed out that many patients with insurance coverage pay far less than the list price. “We are concerned that the administration’s rule requiring list prices in direct-to-consumer (DTC) television advertising could be confusing for patients and may discourage them from seeking needed medical care,” said Stephen J. Ubl, chief executive of the Pharmaceutical Research and Manufacturers of America, the industry trade group.

On Wednesday, the lobbying group announced it had set up a website that would link patients to financial assistance for drugs as well as to company websites that provide data on list prices, typical out-of-pocket costs and sources of financial assistance.

The manufacturer Johnson & Johnson said this year that its ads would begin disclosing the list price, starting with those for the anti-stroke drug Xarelto that carries a $ 448 monthly list price, along with information about the typical consumer co-payment.

“If you’re ashamed of your drug prices, change your drug prices,” said Mr. Azar, who was a top executive with pharmaceutical giant Eli Lilly and Company before joining the Trump administration in January 2018. “It’s that simple.”

He compared the new requirement to a similar one for the automobile industry. “We have for over 50 years required that car manufacturers and car dealers post the sticker price of cars on the windows of their cars, and be transparent about that,” Mr. Azar said. “It’s a starting point.”

The new rule, he added, could prompt drug companies to lower their costs out of fear consumers would reject their products based on sticker shock alone.

Mr. Azar said he expected enforcement of the rule to come from the industry itself, from competing drug companies who sue those who do not comply for deceptive trade practices. If a drug company failed to disclose its price, it would be implicitly suggesting its product costs less than $ 35 a month, he said.

The change is part of a four-part plan by H.H.S. to tackle the issue of rising drug prices. It comes as House Democrats prepare to pass as many as a dozen health care bills, including several intended to lower drug prices, ahead of the 2020 campaign.

Read More:  How many lorazepam can i take safely

Democrats credit their victory in the 2018 midterm elections, in part, to a focus on health care, including preserving the Affordable Care Act.