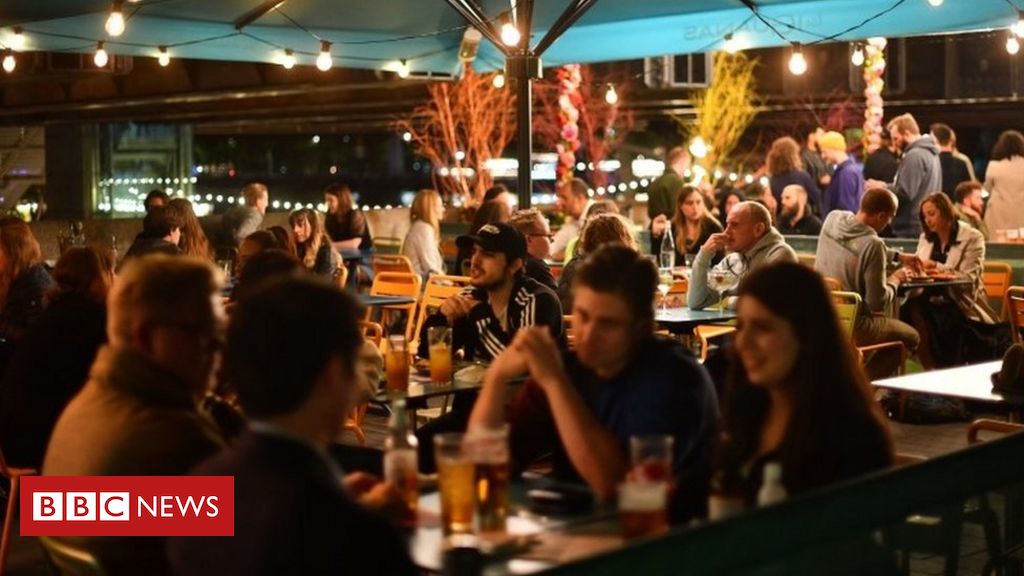 All pubs, bars, restaurants and other hospitality venues in England must have a 22:00 closing time from Thursday, to help curb the spread of coronavirus.

The sector will also be restricted by law to table service only.

The measures will be set out by the prime minister in the Commons before he addresses the nation in a live broadcast at 20:00 BST on Tuesday.

It comes as the UK’s Covid-19 alert level moved to 4, meaning transmission is “high or rising exponentially”.

And, according to newspaper reports, he will urge people to work from home where it does not negatively impact businesses.

The government’s chief scientific adviser Sir Patrick Vallance has warned there could be 50,000 new coronavirus cases a day by mid-October without further action – which, he said, could lead to more than 200 deaths per day by mid-November.

On Monday, a further 4,368 daily cases and 11 deaths were reported in the UK.

Further restrictions will also be announced in Scotland on Tuesday, while restrictions on households mixing indoors will be extended to all of Northern Ireland.

Also from 18:00 on Tuesday, four more counties in south Wales will face new measures, including a 23:00 curfew for pubs and bars.

What difference will it make?

People are understandably asking what difference closing at 22:00 makes. Coupled with the table service law, it will be little more than a marginal gain.

But what ministers hope is that the move, along with the rule of six, will act as a warning to the public that efforts to curb the virus need to be redoubled.

What remains to be seen is whether any other restrictions will accompany this move.

It seems inevitable that the virus will continue to spread – that’s what respiratory viruses do during winter, especially one for which there is limited immunity and no vaccine.

But how quickly and widely – no one knows.

The risk of trying to suppress the virus is the government will soon find itself having to make another decision about further steps.

How far are ministers prepared to go? Every restriction that is taken has a negative consequence to society.

But the nature of the virus means lives will undoubtedly be lost the more it spreads. Balancing those two harms will define the next six months.

The cabinet will meet on Tuesday morning and Boris Johnson will also chair a Cobra emergency meeting – which will be attended by the first ministers of Scotland, Wales and Northern Ireland.

Speaking about the new closing times, a No 10 spokesperson said: “We know this won’t be easy, but we must take further action to control the resurgence in cases of the virus and protect the NHS.”

Tighter restrictions on pub and restaurant opening times are already in place in parts of north-east and north-west England, and Wales.

Liberal Democrat leader Sir Ed Davey described the new rules as “a step backwards”, as he urged the government to fix the test and trace system and help the hospitality sector.

“After people have already been through so much hardship, we cannot allow thousands of jobs to disappear overnight,” he said.

There were also calls for support from within the hospitality sector.

Kate Nicholls, chief executive of trade body UKHospitality, said the new rules should be “applied with flexibility”, and that a 22:00 closing time was “bad for business and bad for controlling the virus”.

She added: “Table service has been widely adopted in some parts of the sector since reopening, but it is not necessary across all businesses, such as coffee shops.”

Meanwhile, Michael Kill, chief executive of the Night-Time Industries Association, warned the move would result in a “surge of unregulated events and house parties”.

If Boris Johnson had decreed a year ago that he was going to call last orders on the pub at 22:00, the ravens might have left the Tower.

But given the terrible warnings from the government’s top scientists on Monday, the kind of strict measures that ministers had been discussing – and the extent of restrictions that many people are already living with in some of our towns and cities – you might wonder if what the prime minister has ended up deciding is less stringent than it might have been.

As we have talked about many times, Downing Street is all too aware of the economic havoc the restrictions around the pandemic have caused.

Logically, therefore, it has always only wanted to take action when it has felt absolutely urgent. It is also the case that, as we enter a second surge, more is understood about the virus itself.

That means the government ought to be able to take a more sophisticated approach to managing the spread, rather than blunt, blunderbuss nationwide measures.

At least for now, the prime minister has concluded there is a narrow, but real chance to put the brakes on the outbreak before taking more draconian steps.

It comes as Christopher Snowdon, head of lifestyle economics at free-market think tank the Institute of Economic Affairs, said the latest restrictions seemed “to have emerged from a random policy generator” as he called on the government to publish the evidence upon which it was based.

“While mandatory table service has been part of the successful Swedish approach and may have merit, the new closing time will be devastating to a hospitality sector that was already suffering after the first lockdown,” he said.

New measures will also come into force in Lancashire, Merseyside, parts of the Midlands and West Yorkshire from Tuesday.

Other areas of England, Scotland and Wales are already under local lockdown, with restrictions including a ban on mixing with other households.

The prime minister’s announcement on closing times comes after a series of meetings over the weekend, including with the government’s chief medical adviser Prof Chris Whitty, Chancellor Rishi Sunak and Health Secretary Matt Hancock.