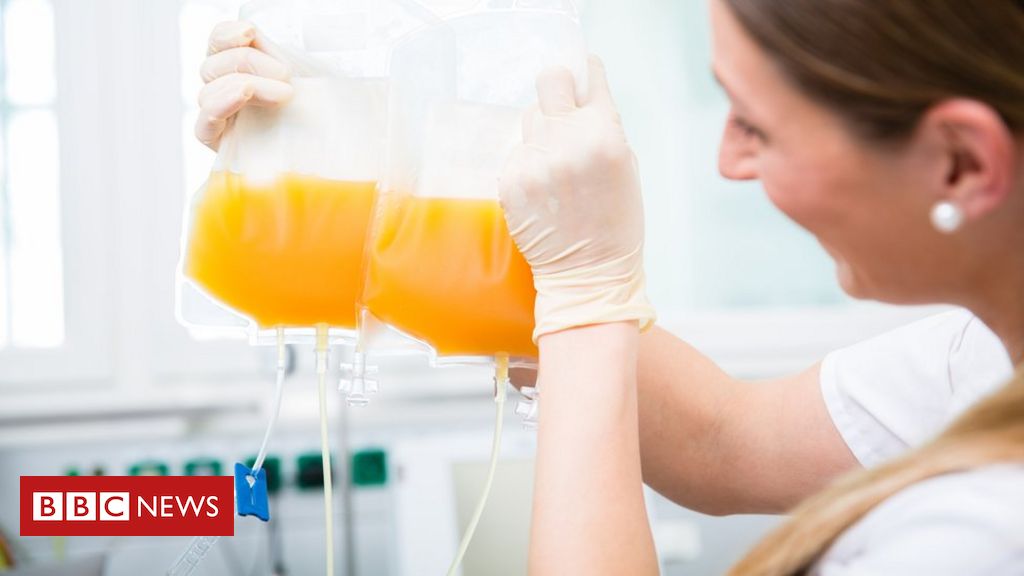 Men who have had coronavirus are being urged to donate plasma from their blood to be used in research into treatments for Covid-19.

This means their plasma could be more useful for saving lives.

NHS Blood and Transplant says the plasma could be used to treat hospital patients if trials are successful.

It started requesting blood and plasma from Covid survivors in April and, by mid-May, nearly 600 people had donated their plasma.

Of the donations from men, 43% had high enough levels of antibodies to be used in trials, compared with just 29% of those from women.

Higher antibody levels were also more often found in older patients, Asian patients and those who had been treated in hospital for Covid-19.

“We’d still like to hear from anybody who had coronavirus or the symptoms,” Prof David Roberts, associate director for blood donation at NHS Blood and Transplant, said.

“But we would especially want to hear from men.”

Not everyone can donate plasma – the first step is to fill out a form on the NHS Blood and Transplant website.

Simon Callon, 51, from St Helens, Merseyside, donated his plasma after he became unwell with coronavirus and lost his father, Noel, to Covid-19.

Simon did not have a cough when he was infected but he did have “piercing headaches” and shivered at night for a few days.

He was able to be tested because his partner works for the NHS.

A few weeks later, his father became ill and was admitted to hospital with low oxygen levels but did not survive.

“I don’t want anybody going through what happened to my dad,” Simon says.

“He died on a hospital ward with no family or friends, with a nurse holding his hand.

“Only 10 people were allowed at his funeral.

“If you can save somebody or help somebody, you would do it.”

It’s a yellow-ish liquid that makes up about half of blood volume and carries red and white blood cells and platelets around the body.

After someone is infected with a virus, the plasma contains antibodies used to help fight infection.

This antibody-rich plasma – called convalescent plasma – is formed when someone has recovered from Covid-19, usually 28 days after being ill.

Why is it important?

This convalescent plasma could be given to Covid-19 patients by transfusion (like blood) to help them fight off the disease and improve their chances of survival.

Two clinical trials in the UK, Remap-Cap and Recovery, are under way to test out how well this works.

Other trials using plasma as a treatment are taking place in the US and elsewhere.

Who can donate convalescent plasma?

Only those who have had coronavirus symptoms and only once they have fully recovered, giving time for antibodies to develop.

Donors need to go to one of 23 donor centre in various cities across England.

Is it the same as donating blood?

It’s different. The process takes about 45 minutes and separates plasma from the blood as you donate.

The body usually replaces the plasma donated in 48 hours.