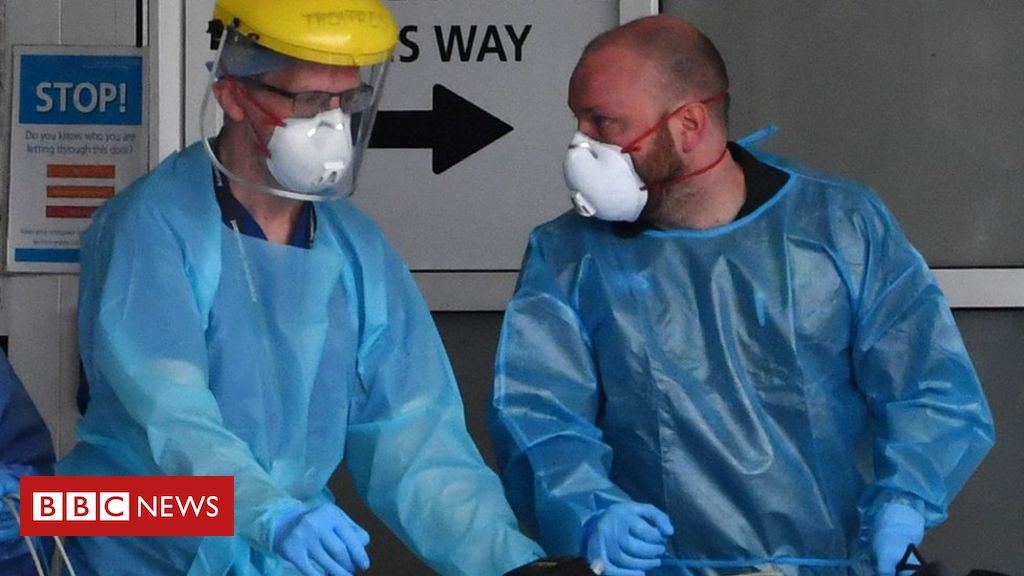 An “enormous strain” has been put on the system for obtaining protective kit for NHS staff and care workers, the education secretary has said.

Some 400,000 gowns had been expected to arrive from Turkey on Sunday, but the government said it had been delayed.

Gavin Williamson was asked by the BBC why British suppliers offering to make protective kit had not been contacted.

He responded that government hoped to speak to them within the next 24 hours, and the gowns should arrive on Monday.

“I think we all recognise the enormous strain that has been placed on the whole system and we also recognise that right across the globe people are trying to get the same items of PPE from quite a limited number of suppliers,” Mr Williamson said at the daily Downing Street coronavirus briefing.

BBC Health editor Hugh Pym also asked why stocks had been allowed to run down over the last couple of years, and why more was not done to boost them in March and February.

The education secretary said “every resource of government” had been deployed to expand supplies of PPE and ventilators.

England’s deputy chief medical officer Dr Jenny Harries, meanwhile, said the UK remained an “international exemplar” of pandemic preparedness, adding there had been challenges but the government was “always looking ahead”.

The pledge to take delivery of more protective kit came after warnings that some hospitals’ intensive care units could run out of gowns this weekend.

Read More:  AbbVie pegs growth to booming Skyrizi, Rinvoq in post-merger future. But neurology could be a 'sleeper'

“Healthcare workers desperately need proper and effective protection now – by whatever means possible,” he said, adding: “This really is a matter of life and death.”

Public Health England changed its advice on Friday to allow the NHS to re-use gowns if stock was running low, saying “some compromise” was needed “in times of extreme shortages”.

It asked staff to reuse “(washable) surgical gowns or coveralls or similar suitable clothing (for example, long-sleeved laboratory coat, long-sleeved patient gown or industrial coverall) with a disposable plastic apron for AGPs (aerosol-generating procedures) and high-risk settings with forearm washing once gown or coverall is removed”.

The guidance also said hospitals could reserve the gowns for surgical operations and procedures which were likely to transmit respiratory pathogens.

NHS England’s medical director Prof Stephen Powis said for the guidance on the use of protective equipment to be properly followed, it was “absolutely critical above everything else that we have the supplies of PPE going out to the front line”.

But the Royal College of Nursing said the guidance was developed without a full consultation and the British Medical Association (BMA) – which represents doctors – said any change must be driven by science, not availability.

The delay to the consignment is a real worry, both in the short and long-term.

It is clear the pandemic stocks we have been largely relying on to date are running out, at least in terms of gowns and visors.

It has left us depending on international supply – certainly for gowns – as we do not seem to be able to manufacture them ourselves.

Read More:  Which drink is best for hydration? Hint: It isn't water

Given the international demand for them, this threatens to be an on-going issue that could cause problems for months to come.

Staff are understandably worried – they are putting their lives at risk.

Ministers and their officials are clearly working hard to do what they can.

But in the future, serious questions will need to be asked about why this situation has arisen in the first place.

Cabinet Office Minister Michael Gove said the UK had built up stocks of PPE in expectation of a flu pandemic – as well as to prepare for the possibility of a no-deal Brexit – but he said there was a “worldwide pressure” on supplies.

Labour’s shadow health secretary, Jon Ashworth, said “serious mistakes have been made” by the government in tackling the outbreak.

He told Sky News: “We know that our front-line NHS staff don’t have the PPE, that they’ve been told this weekend that they won’t necessarily have the gowns which are vital to keep them safe.”

The government has appointed Lord Deighton, who headed the organising committee of the London Olympics, to resolve problems with supplies and distribution of PPE.

Have you been affected by the issues raised in this story? Share your experiences by emailing haveyoursay@bbc.co.uk.

Please include a contact number if you are willing to speak to a BBC journalist. You can also contact us in the following ways: