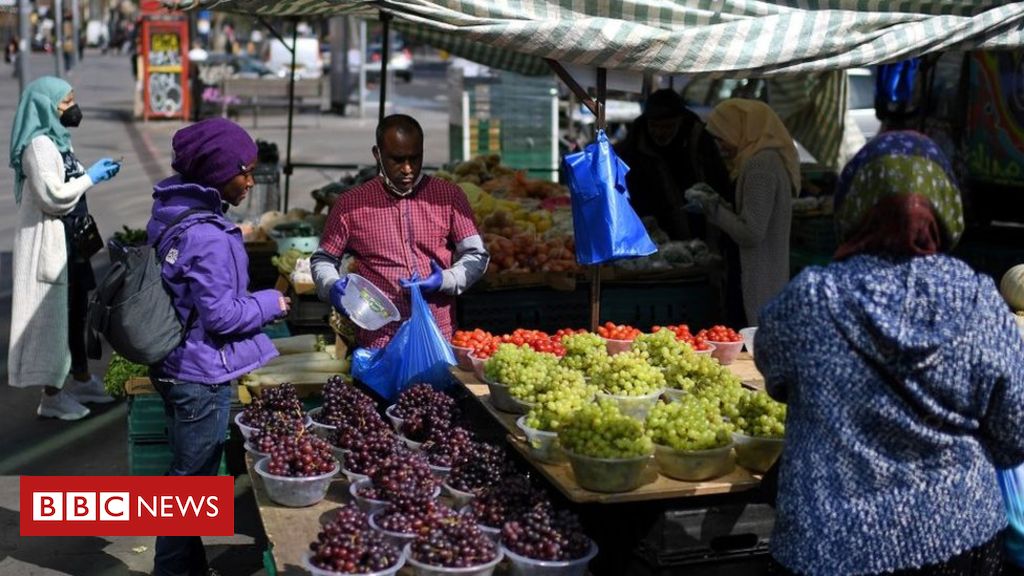 Black men and women are nearly twice as likely to die with coronavirus as white people in England and Wales, according to the Office for National Statistics.

The analysis shows the inequality persists after taking into account age, where people live and some measures of deprivation and prior health.

People from Indian, Bangladeshi and Pakistani communities also had a significantly higher risk of dying.

The government has launched a review into the issue.

The analysis by the ONS combined data on deaths involving Covid-19 with information on ethnicity from the 2011 census.

Taking into account age, location and some measures of deprivation, disadvantage and prior health, it found black people were 90% more likely to die with Covid-19 than white people.

Men and women from Indian, Bangladeshi and Pakistani communities had an increased risk of between 30% and 80%, the analysis found.

The ONS suggested some of the risk might be caused by other social and economic factors that are not included in the data.

And it said that some ethnic groups may be “over-represented in public-facing occupations” and so more at risk of being infected while at work.

The ONS plans to examine the link between coronavirus risk and occupation.

Without taking into account factors such as prior health and location, the analysis found black people were more than four times as likely to die after contracting the virus.

But Prof Keith Neal, emeritus professor of the epidemiology of infectious diseases at the University of Nottingham, said that figure was “misleading”.

He said not adjusting for “known factors” like whether groups were living in areas with more coronavirus cases could make the difference in risk appear even bigger than it was.

After factoring in these issues, the death rate among black men and women was 1.9 times as high as white men and women. For Bangladeshi and Pakistani men the risk was 1.8 times higher, and for women in those communities it was 1.6 times higher.

One expert in communicable diseases said the NHS should pull BAME staff at greater risk of infection “out of the front line”.

Afterwards, he said, experts could investigate further whether the issue was caused by other health problems prevalent in ethnic minority communities, such as heart disease or diabetes, or whether there was another explanation.

Foreign Secretary Dominic Raab told the daily coronavirus briefing in Downing Street that Public Health England was investigating what “interventions can sensibly be made” to protect BAME frontline workers.

“We’re very concerned about it, it’s something we take very seriously,” he said.

The raw numbers on coronavirus deaths in England and Wales and ethnicity are stark.

People from black backgrounds make up just over 3% of the population but account for 6% of coronavirus deaths.

But what’s causing this? Raw numbers don’t give the reason why. You need to take account of the differences between communities that could explain it.

More people from black, Asian or minority ethnic communities live in cities where the epidemic has been worst. But white communities are older on average, and the coronavirus hits older people harder.

If you take account of age differences, but not of other factors, black people are four time more likely to die with coronavirus.

If you also take account of where people live, that difference falls but doesn’t disappear: black people are just over twice as likely to die with coronavirus.

Accounting for rough measures of health and wealth changes it a little, bringing the risk down to just under twice as likely. But the analysis doesn’t address the impact of exposure at work or current health conditions.

“It is urgent the causes of this disproportionality are investigated. Action must be taken to protect black men and women – as well as people from all backgrounds – from the virus,” the Labour MP for Tottenham said on Twitter.

Nicole Andrews, a lecturer in health and social care at Newman University in Birmingham, told the BBC the figures were “completely devastating” but not surprising, as “there is a long legacy of poor health outcomes for our communities” in the UK.

Black and minority ethnic workers were more likely to be in front-line positions with more contact with the public, leading to a greater risk of the exposure to the virus, Dr Andrews said.

Research by the Health Foundation found that in London, while black and Asian workers made up 34% of the overall working population, they represented 54% of workers in food retail, 48% of health and social care staff, and 44% of people working in transport.

Helen Barnard, acting director of the Joseph Rowntree Foundation, said workers from black, Asian and minority ethnic backgrounds were also more likely to live in overcrowded homes, increasing the risk of the virus spreading to their families.

She said that the UK entered the crisis with “a rising tide of low pay, insecure jobs and spiralling living costs” and “we must ask ourselves what kind of society we want to live in after the virus passes”.

A Department of Health and Social Care spokeswoman said it had commissioned Public Health England to examine different factors such as ethnicity, obesity and geographical location that may influence the effect of the virus.

“It is critical we find out which groups are most at risk so we can take the right steps to protect them and minimise their risk,” she said.