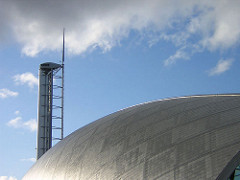 Even before the first computer was conceptualized, data had already been stored on hard copy medium and used with a machine.  As early as 1801, the punched card was used as a control device for mechanical looms.  One and one-half centuries later, IBM joined punched cards to computers, encoding binary information as patterns of small rectangular holes.  Today, punch cards are rarely used with computers. Instead, they are used for a handful of train tickets and election ballots.  Although some may find it surprising, a computer printout is another type of hard copy medium.  Pictures, barcodes, and term papers are modern examples of data storage that can later be retrieved using optical technology.  Although it consumes physical space and requires proper care, non-acidic paper printouts can hold information for centuries.  If long-term storage is not of prime concern, magnetic medium can retain tremendous amounts of data and consume less space than a single piece of paper.   The magnetic technology used for computer data storage is the same technology used in the various forms of magnetic tape from audiocassette to videocassette recorders.  One of the first computer storage devices was the magnetic tape drive. Magnetic tape is a sequential data storage medium. To read data, a tape drive must wind through the spool of tape to the exact location of the desired information. To write, the tape drive encodes data sequentially on the tape. Because tape drives cannot randomly access or write data like disk drives, and are thus much slower, they have been replaced as the primary storage device with the hard drive.  The hard drive is composed of thin layers of rigid magnetic platters stacked on top of one another like records in a jukebox, and the heads that read and write data to the spinning platters resemble the arm of a record player.  Floppy disks are another common magnetic storage medium.  They offer relatively small storage capacity when compared to hard drives, but unlike hard drives, are portable.  Floppy disks are constructed of a flexible disk covered by a thin layer of iron oxide that stores data in the form of magnetic dots. A plastic casing protects the disk: soft for the 51/4-inch disk, and hard for the 31/2-inch disk.  Magnetic storage medium, for all its advantages, only has a life expectancy of twenty years.   Data can be stored on electronic medium, such as memory chips.  Every modern personal computer utilizes electronic circuits to hold data and instructions.  These devices are categorized as RAM (random access memory) or ROM (read-only memory), and are compact, reliable, and efficient.  RAM is volatile, and is primarily used for the temporary storage of programs that are running.  ROM is non-volatile, and usually holds the basic instruction sets a computer needs to operate.  Electronic medium is susceptible to static electricity damage and has a limited life expectancy, but in the modern personal computer, electronic hardware usually becomes obsolete before it fails.  Optical storage medium, on the other hand, will last indefinitely.   Optical storage is an increasingly popular method of storing data.  Optical disk drives use lasers to read and write to their medium. When writing to an optical disk, a laser creates pits on its surface to represent data. Areas not burned into pits by the laser are called lands. The laser reads back the data on the optical disk by scanning for pits and lands. There are three primary optical disk mediums available for storage: CD-ROM (compact disc read-only memory), WORM (write once read many), and rewritable optical disks. The CD-ROM is, by far, the most popular form of optical disk storage; however, CD-ROMs are read-only. At the factory, lasers are used to create a master CD-ROM, and a mold is made from the master and used to create copies. WORM drives are used almost exclusively for archival storage where it is important that the data cannot be changed or erased after it is written, for example, financial record storage.Rewritable optical disks are typically used for data backup and archiving massive amounts of data, such as image databases.   Although there are many manufacturers of the data storage devices used in the modern personal computer, each fits into one of four technological classes according to the material and methods it uses to record information.  Hardcopy medium existed before the invention of the computer, and magnetic medium is predominantly used today.  Electronic medium is used by every computer system, and is used to store instructions or temporarily hold data.  Finally, optical storage medium utilizes lasers to read and write information to a disk that lasts indefinitely.  Each type of medium is suitable for certain functions that computer users require. Although they use differing technologies, they all have equal importance in the modern personal computer system.

Itech troubleshooter is an advanced web development, high skilled professional software Solution Company located in New Delhi founded by, PRABHAKAR MISHRA in the year 2008.The company provides vast range of services to each and every customer in reaching their respective targeted spectators and their valuable information in fix and on steady affordable price. Today, you can easily get a lot of quality services by this company on just dialing a call to the company which includes services like website designing , web application development , Application development , Maintenance , Re-engineering , Flash development , SEO , SEO Services , Computer AMC , Computer Networking , Wireless Networking , Data Recovery , ERP Solution .