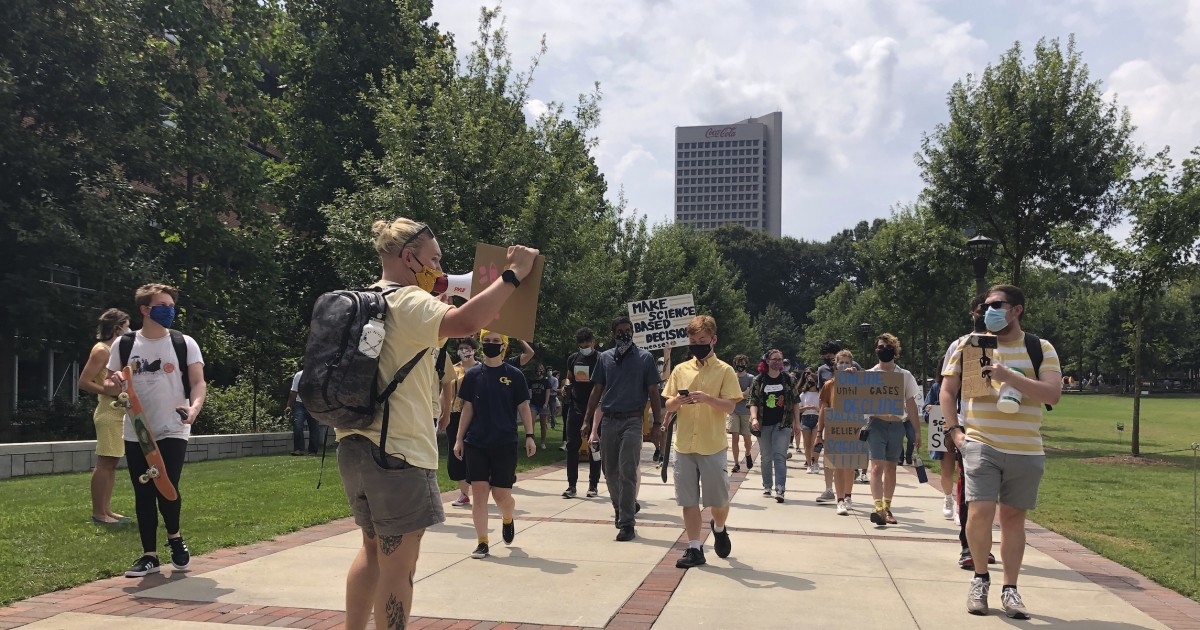 College administrators are clamping down on parties where students flout social distancing measures in an effort to prevent coronavirus outbreaks on campuses.

“Every student must know that the parties and disregard for face masks, physical distancing and gathering size causing other universities to abandon in-person classes will not be tolerated at Vanderbilt,” said Vanderbilt University’s Chancellor Daniel Diermeier.

Syracuse University administrators warned that first-year students who gathered on the campus quad Thursday “may have done damage enough to shut down campus, including residence halls and in-person learning, before the academic semester even begins.” The university called the gathering “selfish and reckless behavior.”

The warnings come just days after the University of North Carolina at Chapel Hill announced that it would move all in-person classes onto remote learning platforms after five clusters of cases in residence halls were reported in just three days. Schools that have reopened or will reopen in the coming weeks are hoping to avoid campus closures that could require students to be sent home.

Officials at North Carolina State University on Thursday announced that all classes would be moved online as of Monday after administrators confirmed three COVID-19 clusters in off-campus and Greek Village houses that can be traced to parties. Another seven Greek houses have been quarantined due to a number of additional positive cases, and the infected students are now in isolation.

“We have also recently witnessed the negative impacts caused by those who did not take personal responsibility. We’ve had reports of large parties in off-campus apartments,” N.C. State Chancellor Randy Woodson said.

“As of today, through our aggressive contact tracing program, we have more than 500 students in quarantine and isolation, mostly off campus, who have either tested positive or have been in contact with someone who has tested positive,” Woodson added.

The number of cases confirmed in the United States has exceeded 5.6 million, and more than 174,000 people have died.

Spain reported 8,148 coronavirus cases Friday after adding more than 7,000 on Thursday. Fernando Simon, the director of health emergencies, said the renewed outbreak is “out of control,” according to Spanish news source the Olive Press. The total number of COVID-19 cases in Spain has reached 386,054. Most of the new cases reported in the past 24 hours were confirmed in Madrid, Spain’s most populous city. Madrid’s Deputy Minister of Public Health Antonio Zapatero has asked residents to “stay at home.”

The Centers for Disease Control and Prevention updated coronavirus guidance for school reopenings Friday that says sick children should be isolated from others, and school staff should alert other students and parents that may have been exposed to the virus.

The updated guidance comes amid university and school reopenings that have resulted in new clusters of coronavirus cases. The CDC offered some suggestions to keep schools open, such as implementing a hybrid learning system that opens schools for in-person classes for part of the week and sends students home for virtual classes for the rest of the week.

Peter Marks, director of the Food and Drug Administration’s Center for Biologics Evaluation and Research, said he would step down if there is a push to approve a coronavirus vaccine that is not safe and effective.

“You have to decide where your red line is, and that’s my red line,” he said. “I would feel obligated [to resign] because, in doing so, I would indicate to the American public that there’s something wrong.”

Postmaster General Louis DeJoy warned a Senate panel Friday that the Postal Service faces indefinite losses if Congress doesn’t provide help. DeJoy, a Republican donor and Trump ally, appeared before the panel because of accusations by Democrats that he initiated changes slowing down mail processing to stop mail-in ballots from being counted in the upcoming election.

He informed the committee that the Postal Service suffered a net loss of nearly $ 9 billion in fiscal year 2019 and is on track for an $ 11 billion loss this year.

“We face an impending liquidity crisis that threatens our ability to deliver on our mission to the American public,” he said, adding that “currently, our liabilities exceed our assets by approximately $ 135 billion.”

A California judge ruled Friday that Rob McCoy, a pastor and local leader in the Los Angeles suburbs, violated previous court orders forbidding him from holding church services indoors. McCoy told the Washington Examiner earlier this week that he had no intention of halting services, citing his First Amendment rights and a low rate of infection in the county.

The S&P 500 ended a banner week Friday by setting another record high for the second time, erasing all pandemic losses. The S&P 500 finished the week about a third of a percentage point above its previous peak in February. The week’s gains mark the fourth consecutive week of gains.