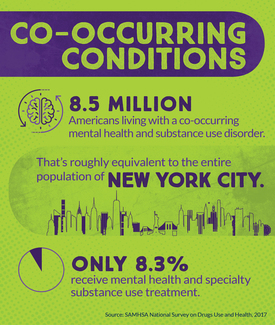 People often refer to substance use as “self-medication.” What they are trying to say is that some teens might drink and do drugs to help themselves feel better when they are suffering from a mental health disorder. Self-medicating is not an official medical term, but it does help explain why some teens experiment with drugs and alcohol.

Research does show that some teens have substance use and other mental health disorders at the same time. For example, a teen who is dealing with depression or anxiety might use drugs to try to cope. Or, a teen who can’t stop using drugs might get depressed about it. In fact, science tells us that regular misuse of drugs and alcohol can actually change the way the brain works, which may contribute to mental health disorder.

Or, there might not be an easy explanation—inherited traits or a person’s life experience can make them vulnerable to brain changes involved in either depression or substance use. Whatever the reason, this is called “co-occurring conditions” or “comorbidity.”

Although substance use disorders commonly occur with other mental illnesses, this does not mean that one caused the other, even if one appeared first. It is important to know that interactions between the illnesses can worsen both situations.