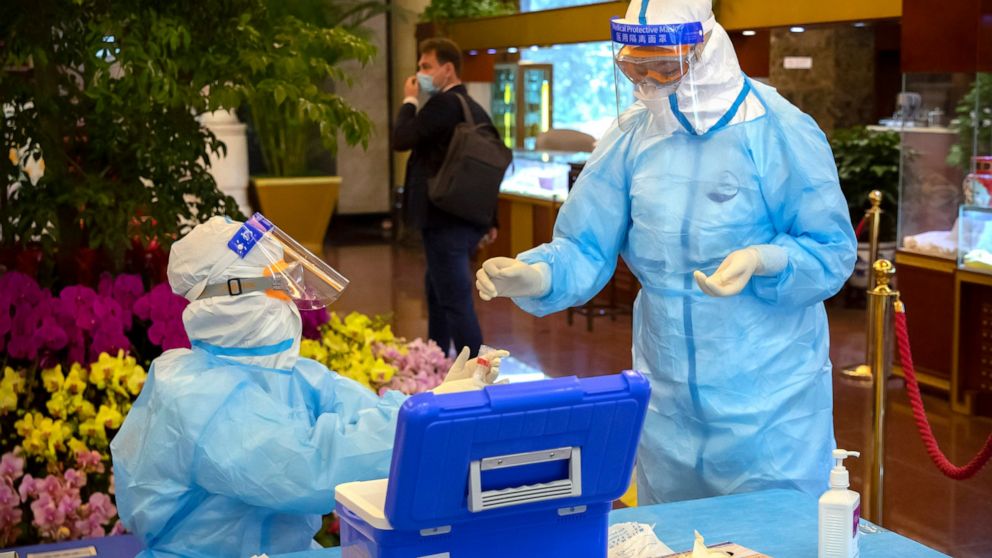 BEIJING — China is convening its biggest political gathering of the year and President Donald Trump has said he is considering meeting with world leaders in June as doubts simmer over how safe is safe enough with the pandemic still not under control.

From meatpacking plants in Colorado to garment factories in Bangladesh, workers are concerned over risks they face as they return to work after shutdowns. The safety questions apply even at the highest levels of the political spectrum.

Trump tweeted that having leaders of the Group of Seven major economies fly in next month for a summit at the Camp David presidential retreat in Maryland would be a “great sign to all” of things returning to normal.

In March, the president canceled the meeting because of the coronavirus pandemic, saying leaders would confer by video conference instead. The District of Columbia remains under stay-at-home orders at least through June 8, though Maryland began relaxing the restrictions last week. At the same time, leaders of the G-7 member nations are in some cases still grappling with the virus in their own countries or in various states of reopening their economies.

Trump’s proposal for meeting around the original date of June 10-12 drew an ambiguous response from Japan, where the chief government spokesman, Yoshihide Suga, said he viewed the tweet as “an expression of the President’s intention to normalize the global economy quickly.”

Suga said such details are still being studied by the U.S. as host nation and that Tokyo was in discussions with Washington.

China’s communist leadership is taking extensive precautions to prevent any infections as it opens its National People’s Congress on Friday and a parallel meeting of advisers on Thursday. The meetings in Beijing were delayed for nearly two months due to the pandemic.

The number of fresh coronavirus cases in China has dropped recently, though clusters of infections have popped up in some areas. China reported two newly confirmed cases on Thursday.

An outbreak at the congress would be a potential public relations nightmare as President Xi Jinping showcases Beijing’s apparent success in curbing the coronavirus that emerged in the central city of Wuhan late last year.

Around the world, the effort to get back to business is raising worries over risks.

Labor leaders and health experts have questioned the ability of recommended safety precautions to protect meatpacking workers, who have suffered severe outbreaks at plants in the U.S. Midwest. The recommendations by the Occupational Safety and Health Administration and the Centers for Disease Control and Prevention are meant to keep meatpacking workers safe as they return to plants that were shuttered by the coronavirus.

But the federal guidelines have scant enforcement muscle and spell out that they are advisory, “not a standard or regulation,” and create “no new legal obligations.”

“It’s like, ‘Here’s what we’d like you to do. But if you don’t want to do it, you don’t have to,’” said Mark Lauritsen, international vice president and director of the food processing and meatpacking division for the United Food and Commercial Workers International Union.

The pandemic is “the most massive workers’ safety crisis in many decades, and OSHA is in the closet. OSHA is hiding,” said David Michaels, an epidemiologist who was the agency’s assistant secretary of labor under President Barack Obama. Michaels called on OSHA to make the guidelines mandatory and enforceable, which would include the threat of fines.

Amid a wave of reopenings in the U.S., many Americans remain wary, according to a new survey from The Associated Press-NORC Center for Public Affairs Research. The poll says 83% of Americans are at least somewhat concerned that lifting restrictions in their area will lead to additional infections.

The poll also exposed a widening partisan divide, with Democrats more cautious and Republicans less anxious as President Donald Trump urges states to “open up our country.” Only about a third of Republicans say they are very or extremely concerned about additional infections, compared with three-quarters of Democrats.

About 5 million people worldwide have been confirmed infected, and over 328,000 deaths have been recorded. That includes more than 93,000 in the U.S. and around 165,000 in Europe, according to a tally kept by Johns Hopkins University, based on government data. Experts believe the true toll is significantly higher.

With the virus far from vanquished, reopenings from pandemic shutdowns could prove to be a stop-and-start, two-steps-forward-one-step-back process.

At the same time, worries over risks of going back to work are overshadowed for many by worries over losing their jobs, or of being unable to find new ones.

With more than 30 million Americans unemployed, more than 10% of U.S. households in a survey last week said they could not get enough of the food they needed some of the time or often. Almost a quarter of respondents said they will have difficulty paying their rent or mortgage or will defer payments, according to survey results released Wednesday by the U.S. Census Bureau.

The weekly U.S. jobless report, due Thursday, could show fewer people seeking unemployment than in recent weeks given that many people are being called back to work as restrictions ease.

In some areas, especially retail, however, those jobs could be short-lived if people change their buying and shopping habits long-term.

The pandemic is proving a huge challenge, too, for China, whose robust economy has helped drive global growth for the past two decades. A major focus for the congress will be reviving growth that fell to its weakest since at least the mid-1960s in the first quarter.

Companies and the public are looking to the largely ceremonial meeting for details on how Beijing might tackle the downturn.

The party’s ultimate goal is to persuade consumers — millions of whom have lost jobs or worry they might — to spend again. One way to do that is by example: the meeting in Beijing sent a signal that was not missed by Chinese who have endured weeks, and in many cases months, of lockdowns.

Zhou Yu, a Beijing bank employee, said he was reassured because the meetings show the epidemic is under control.

“We resumed work in March, and almost all of us are back to work now,” said Zhou. He and his clients wear masks when they meet.

“Because we all pay attention to the precautions and disinfect working areas every day, there’s nothing to worry about,” he said.

Kurtenbach reported from Bangkok. Associated Press reporters from around the world contributed.