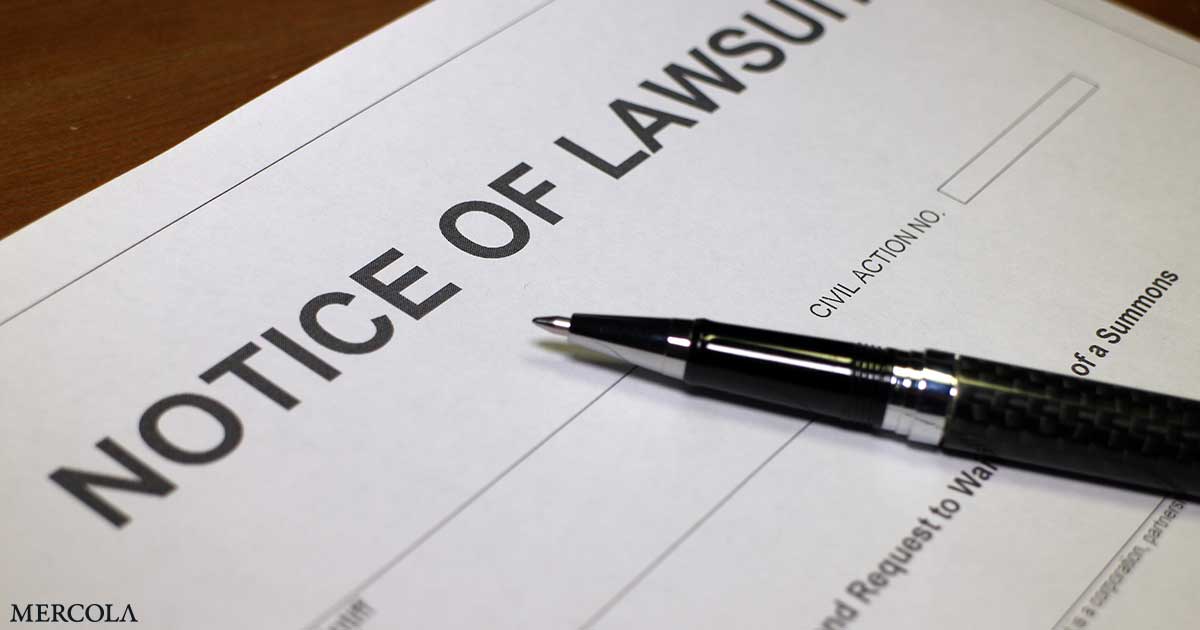 Canadian law firm Diamond & Diamond has filed a class-action lawsuit against various makers of Roundup, including Bayer.1 Bayer acquired Monsanto, Roundup’s original maker, in 2018 for $ 63 billion and has been grappling with related lawsuits ever since.

The Canadian class-action suit names more than 60 individuals as plaintiffs, but thousands more may have been affected. The suit alleges that Roundup, which contains glyphosate as an active ingredient, caused serious health problems in the users, including Non-Hodgkin lymphoma, brain cancer and lung cancer.

“These are not minor injuries,” Darryl Singer, the head of commercial and civil litigation at Diamond & Diamond, told CBC News. “Of the [plaintiffs] that are living, some of them are not likely to see the end of this lawsuit because they will pass away before that.”

In the U.S., approximately 42,700 U.S. lawsuits from individuals alleging that glyphosate caused them to develop cancer have already been filed2 and analysts at JP Morgan suggested the number of glyphosate lawsuits may soon surpass 45,000.3

Bayer isn’t surprised by the rising lawsuits and even stated in October 2019, “With the substantial increase in plaintiff advertising this year, we expect to see a significant surge in the number of plaintiff filings over the third quarter.”4

They’re blaming the increase on lawyers trying to get the word out about these class-action suits, though, instead of acknowledging the truth about Roundup. In a statement to CBC News, Bayer even continued to support the toxic products and label them as safe:5

“While we have great sympathy for the plaintiffs, glyphosate-based herbicides are not the cause of their illnesses … Glyphosate has been extensively studied globally by scientists and regulators, and results from this research confirm it is not carcinogenic.

We firmly stand behind the safety of glyphosate-based products and as a company devoted to life sciences, assure Canadians that their health and the environment are our top priority.”

The statement echoes those made by Monsanto, which has long stated that Roundup was safe for people and the environment. However, internal Monsanto emails released during the glyphosate trials paint a much more sordid picture, one in which Monsanto-affiliated scientists question the chemical’s safety. As reported by Medtruth:6

“In a 2014 email exchange, Monsanto toxicologist Donna Farmer warned a company spokesperson to not call glyphosate safe. ‘We cannot say it [glyphosate] is ‘safe’ … we can say history of safe use, used safely etc,’ Farmer wrote.

She encouraged the spokesperson to instead call the chemical ‘one of the most thoroughly tested herbicides,’ and one that ‘poses no unreasonable risks to people’ when used according to directions.”

Further, Monsanto consultants and epidemiologists specifically warned against stating there’s “no evidence” that glyphosate causes cancer, while company emails suggest Roundup had never been tested to see if it causes cancer in people, despite company claims that it was safe.7

The International Agency for Research on Cancer (IARC) identified glyphosate as a probable human carcinogen in 2015.8 This is alarming, in part, because of the sheer volume of glyphosate that’s been sprayed into the environment.

In the U.S. alone, over 1.6 billion kilograms (3.5 billion pounds) have been applied since 1974. This represents 19% of the glyphosate used globally during that time, and the majority (two-thirds of glyphosate applied from 1974 to 2014) has been applied in the last 10 years.9 Writing in Environmental Sciences Europe, researchers explained:10

“In 2014, farmers sprayed enough glyphosate to apply ~1.0 kg/ha (0.8 pound/acre) on every hectare of U.S.-cultivated cropland and nearly 0.53 kg/ha (0.47 pounds/acre) on all cropland worldwide … In the U.S., no pesticide has come remotely close to such intensive and widespread use.

This is likely the case globally, but published global pesticide use data are sparse. Glyphosate will likely remain the most widely applied pesticide worldwide for years to come, and interest will grow in quantifying ecological and human health impacts.”

What Are the Risks of Roundup?

Stephanie Seneff, a senior research scientist at the Massachusetts Institute of Technology (MIT), has been studying glyphosate for years and has become hooked on determining what makes this ubiquitous chemical so toxic.

You can watch our interview above, but, according to Seneff, the increase in glyphosate usage in the U.S., as well as in Canada, is extremely well correlated with the concurrent increase in the incidence of multiple diseases, including breast cancer, pancreatic cancer, kidney cancer, thyroid cancer, liver cancer, bladder cancer and myeloid leukemia.11

“We don’t know why. We see that glyphosate is perfectly correlated with many of these diseases. It’s also going up exactly in step with these diseases, and there’s many, many plots that I’ve put together in collaboration with other people.”

Research scientist Anthony Samsel is one of Seneff’s co-authors, and together they’ve suggested that one of the ways glyphosate is harmful is via disruption of glycine homeostasis. Glyphosate has a glycine molecule as part of its structure (hence the “gly” in glyphosate). Glycine is a very common amino acid your body uses to make proteins.

Samsel and Seneff believe your body can substitute glyphosate and its metabolite aminomethylphosphonic acid (AMPA) into peptides and proteins, which results in damaged peptides and proteins being produced. Glyphosate causing glycine disruption is still theoretical in nature, not proven, but it makes a lot of sense.

Glyphosate also causes sulfate deficiency “in so many ways,” Seneff says, “it’s almost like it’s a perfect storm,” and impairs the heme pathway and the shikimate pathway, which is involved in the synthesis of the essential aromatic amino acids phenylalanine, tyrosine and tryptophan.12

“Super, super important,” Seneff says. “[These amino acids are] … not only part of the building blocks of proteins which would already be pretty drastic, but they’re also precursors to all the neurotransmitters. Dopamine, serotonin, melatonin, melanin. Skin tanning agent. They’re also precursors to certain B vitamins like folate and I think niacin.”

In August 2018, jurors ruled Monsanto must pay $ 289 million in damages to DeWayne “Lee” Johnson, a former school groundskeeper who claimed the company’s herbicide Roundup caused his terminal cancer.13 The award was later slashed to $ 78 million,14 but it signaled the beginning of Roundup cancer lawsuits siding with victims.

After Johnson’s case, a judge ruled in favor of plaintiff Edwin Hardeman, who alleged his repeated exposures to Roundup, which he used to kill weeds on his 56-acre property, caused him to develop cancer.

Bayer was ordered to pay more than $ 80 million in the case,15 which was later reduced to $ 25.2 million.16 In a similar trend, the third Monsanto Roundup case involved a married couple, Alva and Alberta Pilliod, who both developed Non-Hodgkin lymphoma after regular use of Roundup.

The jury ordered Bayer to pay $ 2 billion in punitive and compensatory damages,17 but a judge later said the punitive damages, which make up the majority of the award, should be reduced. Additional trials continue to be postponed until 2020, including the first set in the area of Monsanto’s former hometown, St. Louis, Missouri, and one scheduled in San Francisco.

The San Francisco case is notable, as it originally involved only Elaine Stevick, who is battling aggressive Non-Hodgkin lymphoma she believes is the result of repeated use of Roundup.

In October 2019, however, Stevick’s husband, Chris, who often mixed Roundup for his wife, was also diagnosed with Non-Hodgkin lymphoma, and lawyers are battling out whether this pertinent diagnosis can be added to the case, or if the trial will be delayed further. U.S. Right to Know reported:18

“Monsanto’s attorneys oppose the joining of the claims and say that Elaine Stevick’s trial should only proceed in February if there is no mention made of her husband’s cancer. Alternatively, Monsanto requests that the February trial be delayed and the company be given time to do discovery into Chris Stevick’s diagnosis.”

Research published in Frontiers in Genetics also supports glyphosate’s cancer link, finding that exposure in low concentrations (in parts per trillion) may induce cancer in cells when combined with microRNA-182-5p (miR182-5p).19

MicroRNA-182-5p is a gene regulatory molecule found in everyone, and overexpression of the molecule has been linked to cancer. Michael Antoniou of King’s College London, who peer reviewed the study, stated, “These observations highlight for the first time a possible biomarker of glyphosate activity at the level of gene expression that could be linked with breast cancer formation.”20

Glyphosate a Danger to All Life

In December 2019, the EU will begin its three-year reevaluation of glyphosate, with the debate expected to focus less on the specific cancer threats to humans and more on its overriding threat to the environment, including to biodiversity and aquatic life. Speaking to Politico, Jeroen van der Sluijs, a professor of science and ethics at Norway’s Bergen University, explained:21

“It [glyphosate] kills a lot of non-target plants and it leads to an agricultural practice where you have monoculture with no wild plants left in the fields … If you remove all the wild plants from the fields then you only have the crop that flowers and that’s only a very short period in the year. The rest of the year there’s nothing to forage on.

… We find [glyphosate] everywhere in surface waters, it is indeed toxic for all kinds of aquatic organisms, so of special concern are amphibians like frogs and salamanders.”

Bayer, meanwhile, has been spinning a similar rhetoric relating to environmental harms as they have been for cancer, basically downplaying the links and claiming the chemical is safe and “does not pose a risk to nontarget organisms.”22

Here again, evidence suggests otherwise. As usage of the glyphosate has skyrocketed, milkweed, which is the only plant on which the adult monarch butterfly will lay its eggs, has plummeted.

In 2013, it was estimated that just 1% of the common milkweed present in 1999 remained in corn and soybean fields and, tragically, while milkweed is not harmed by many herbicides, it is easily killed by glyphosate.23 A 2017 study published in the journal Ecography further noted a strong connection between large-scale Monarch deaths and glyphosate application.24,25

Germany, for one, isn’t waiting any longer for glyphosate to continue decimating the environment. When the EU’s approval period for glyphosate ends in 2023, Germany announced it would be banning the chemical, with the phase-out starting even sooner.26 Germany’s decision to ban the chemical is based on its effects on insect populations, including pollinators that support the food supply.

Worldwide, more than 40% of insect species are threatened with extinction in the next few decades.27 Researchers cited compelling evidence that agricultural intensification is the main driver of population declines in birds, small mammals and insects, and the next most significant contributor named is pollution, primarily that from synthetic pesticides and fertilizers.

How to Curb and Detoxify Your Glyphosate Exposure

The lawsuits that continue to be filed against glyphosate’s maker are signs of just how widespread the damage from this ubiquitous chemical has become. For now, investing in a good water filtration system for your home and eating as much organic or biodynamically grown foods as possible are among your best methods for reducing exposure, as is eliminating its use around your home garden.

In the interview above, Seneff also shares some tips for detoxing glyphosate, which include consuming organic, unpasteurized apple cider vinegar, as it contains acetobacter, one of the few substances known to break down glyphosate.