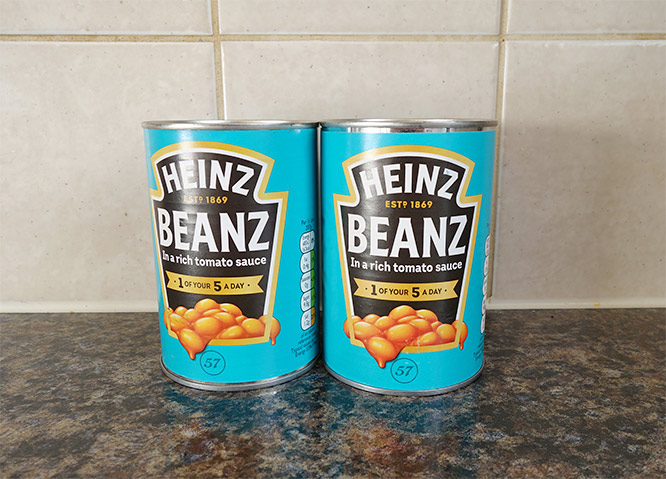 Heinz Baked Beanz have been a staple food in British store cupboards since Henry J Heinz created them over 150 years ago. But are Heinz Baked Beanz healthy—and do they provide the necessary nutrients that contribute to a balanced daily diet?

If you’re curious to discover if Heinz baked beans are good for you, we’ve researched the nutritional pros and cons of this classic British snack.

Heinz Baked Beans use haricot beans, a type of legume, which contribute to 51% of the contents of a can. The beans are soaked in a tomato-based sauce, which consists of:

The good news for anyone who loves beans on toast is that the Heinz variety contains no artificial colours, preservatives or flavours and they are also low in fat. The not so good news is that they contain added sugar.

Heinz Beanz are a nutritious option as they are naturally high in fibre and protein. They are low in fat and contribute towards 1 of your 5 a day.

Heinz Beanz are a good source of plant-based protein (4.7g per 100g), which provides 19% of your daily recommended intake (RI) and helps to grow muscle mass.

They also supply 3.7g of fibre per 100g, which promotes gut health and regular bowel movements.

Millions of parents across the UK serve up Heinz Beanz to their children as part of a low-fat lunch. 100g of beans contains just 0.2g fat—of which less than 0.1g is saturated fat—helping to keep young hearts healthy.

The carbohydrate content of 100g of original recipe Heinz Beanz is 12.5g (of which 4.7g is sugar). If you want to lower your sugar intake, Heinz also produce a low-sugar alternative which reduces the amount of sugar to 1.9g in the no added sugar version.

The main ingredient, haricot beans, contain important minerals including iron and zinc, which is essential to help the immune system fight viruses and bacteria. They are also rich in B vitamins, which help the body release energy from food.

All canned beans tend to be very salty, and Heinz Beanz are no exception. Sodium is something we should all be trying to cut down on in our diet, particularly those who have high blood pressure. 100g of Heinz Beanz contain 0.6g (21%) of an adult’s daily sodium RI.  The no added sugar recipe is a better choice with a 25% reduction in sodium at 0.4g (15%) RI. 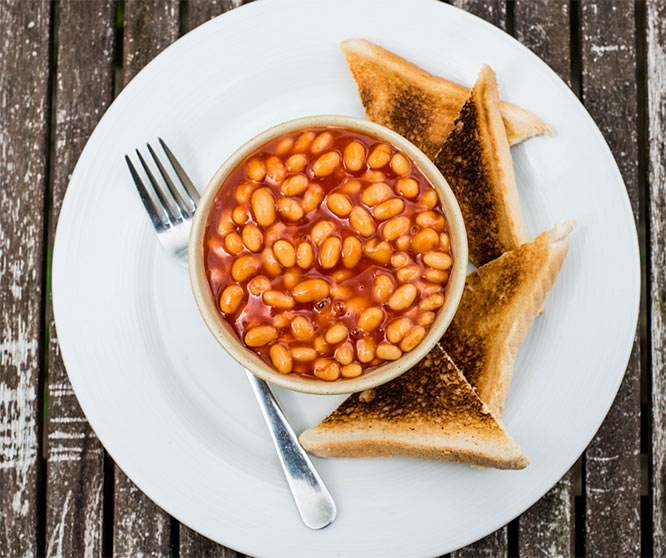 As well as the original recipe and the no added sugar version, Heinz produce a range of baked beans options, including an organic version which use only organically grown ingredients that are certified by the Soil Association.

There are also five flavours of Heinz Beanz to choose from: BBQ, Peri-Peri, Fiery Chilli, Curry, and Smokey Bacon, but with the exception of the Peri-Peri flavour they all contain higher sugar levels that the original recipe. The Curry flavour is the highest in sugar at 7.0g per 100g. These versions are not particularly healthy due to high sugar content and you should avoid them if you can.

What is the calorie count of Heinz Baked Beanz?

The calorie counts of Heinz Beanz varies depending on the recipe and flavour you choose:

One of the most popular ways to serve baked beans is on toast. A small 200g can of classic Heinz Baked Beanz with a slice of wholemeal toast would provide 226 calories. If 10g butter is added to the toast, this would increase the calorie count to 298.

The salt content of Heinz Baked Beanz means they are not suitable for babies. High levels of sodium could potentially harm developing kidneys and increase their craving for salty food in later life. A report from the University Of Bristol found that almost three-quarters of UK babies aged 8 months consume too much sodium.

How many SYNS are in Heinz Baked Beans?

If you’re trying to lose weight on the Slimming World Programme, then Heinz Beans are a great choice as they are SYN-free, so they can be enjoyed as part of a balanced diet without measuring and weighing them before you eat.

Can you reheat Heinz Baked Beanz?

It’s recommended to only heat the beans you need and remove the remainder of the beans from the can and place in an airtight container in the fridge to use within two days.

Heinz baked beans tick many of the healthy option boxes: They are high in plant-based protein, fibre, B vitamins and contribute to one of your 5 a day. They are also low in fat which helps to maintain healthy cholesterol levels.

Read More:  Mediterranean diet why is it healthy

Heinz Beanz are gluten-free and suitable for people who follow a vegetarian or vegan diet.

However, they are high in salt and the classic recipe does contain added sugar. Your healthiest option is to choose the no added sugar Heinz Beanz variety and enjoy them as part of a nutritional and balanced diet.

Author Bio
Kerry Garner has an interest in nutrition and is always on the look-out for new, healthy and exciting snacks for her son’s packed lunch to ensure he gets a balanced diet that’s not boring. She is a keen home-cook and loves nothing more than experimenting in the kitchen and inventing nutritious, yet tasty meals for her family to enjoy.