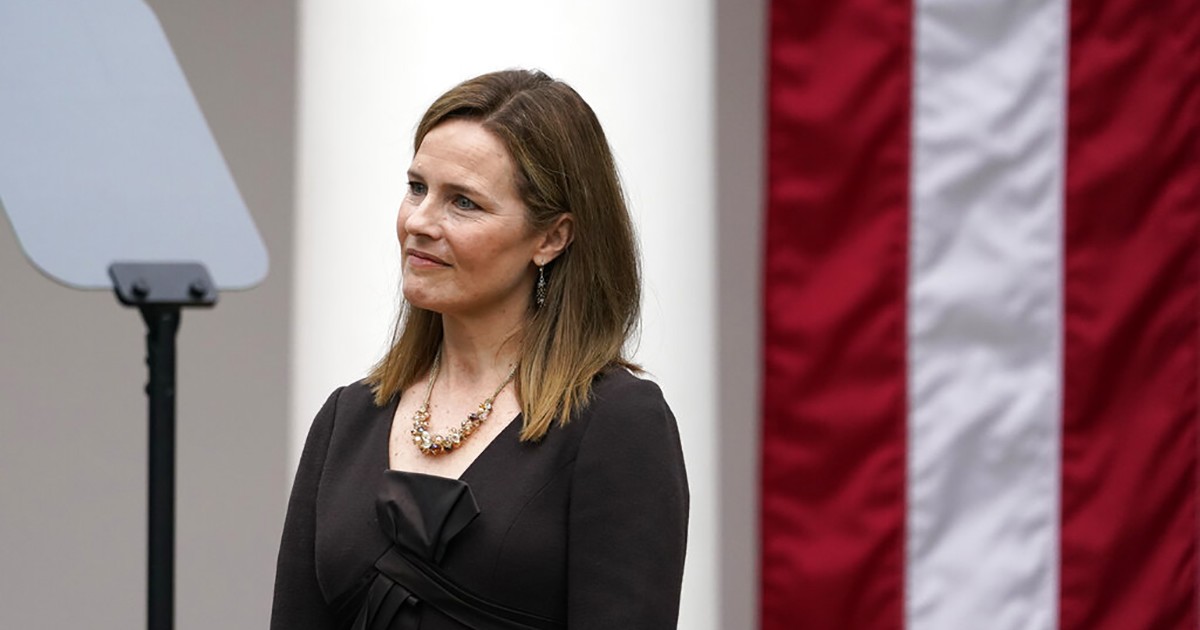 With healthcare and the fate of Obamacare being significant election issues and Democrats scrambling for a way to stop Judge Amy Coney Barrett from joining the Supreme Court, Barrett’s position on the healthcare law, known as the Affordable Care Act, will likely be front-and-center at her confirmation hearing.

Democratic members of Congress and presidential nominee Joe Biden focused on healthcare in initial comments opposing her confirmation Saturday. Barrett “has a written track record of disagreeing with the U.S. Supreme Court’s decision upholding the Affordable Care Act,” Biden said in a statement.

Barrett, President Trump’s nominee to fill the Supreme Court vacancy created by the death of Ruth Bader Ginsburg, has not opined from the bench about the healthcare law. Yet she has written about it in a law journal article. That will no doubt come under scrutiny from Democrats during her confirmation hearing.

A week after Election Day, the Supreme Court is scheduled to hear a case, California v. Texas, involving the ACA’s individual mandate, the law’s controversial requirement that people must buy health insurance or pay a fine.

The Republican attorneys general who brought the case claim the mandate was made unconstitutional when it was set to $ 0 by Trump’s 2017 tax overhaul. They argue that, since the mandate was considered an essential component of Obamacare and it has been removed, the entire law must fall.

Undoing the law would jeopardize the health coverage of millions of Americans, especially those with preexisting conditions and those who receive subsidies to fund coverage under the ACA.

One question Barrett will surely face at the hearing is if she believes the entire ACA is invalidated should the mandate be found unconstitutional. What is not in question is her position on the constitutionality of the mandate, which she addressed in a 2017 article for Notre Dame Law School.

Read More:  'I beat my abusive relationship with sugar after tipping scales at 23st - here's how you can too'

The background for the article is that in the 2012 case NFIB v. Sebelius, Chief Justice Roberts was the swing vote in a 5-4 decision upholding the mandate. Barrett claimed that “Roberts pushed the Affordable Care Act beyond its plausible meaning to save the statute. He construed the penalty imposed on those without health insurance as a tax, which permitted him to sustain the statute as a valid exercise of the taxing power; had he treated the payment as the statute did — as a penalty — he would have had to invalidate the statute as lying beyond Congress’s commerce power.”

As Democrats desperately want to derail her confirmation, they will likely be scrutinizing Barrett’s overall record on healthcare issues. However, beyond the 2017 article, the pickings seem slim. Barrett has not ruled on healthcare laws like the ACA, Medicare, or Medicaid from her seat on 7th Circuit Court of Appeals. But she has written opinions that deal with healthcare issues, at least tangentially, including birth control and disability rights. Those cases may come up in what could prove a contentious confirmation hearing.

Here are a few of those rulings in which Barrett wrote for the majority of the court:

— Dalton v. Teva North America. When Cheryl Dalton’s doctor tried to remove her intrauterine device, part of it became lodged in her uterus. Dalton sued the IUD maker, Teva North America, under Indiana Law. A lower court ruled against Dalton, saying that she did not provide expert evidence that the Teva was at fault. Dalton appealed, and Barrett upheld the decision, ruling that the lower court had correctly applied the law.