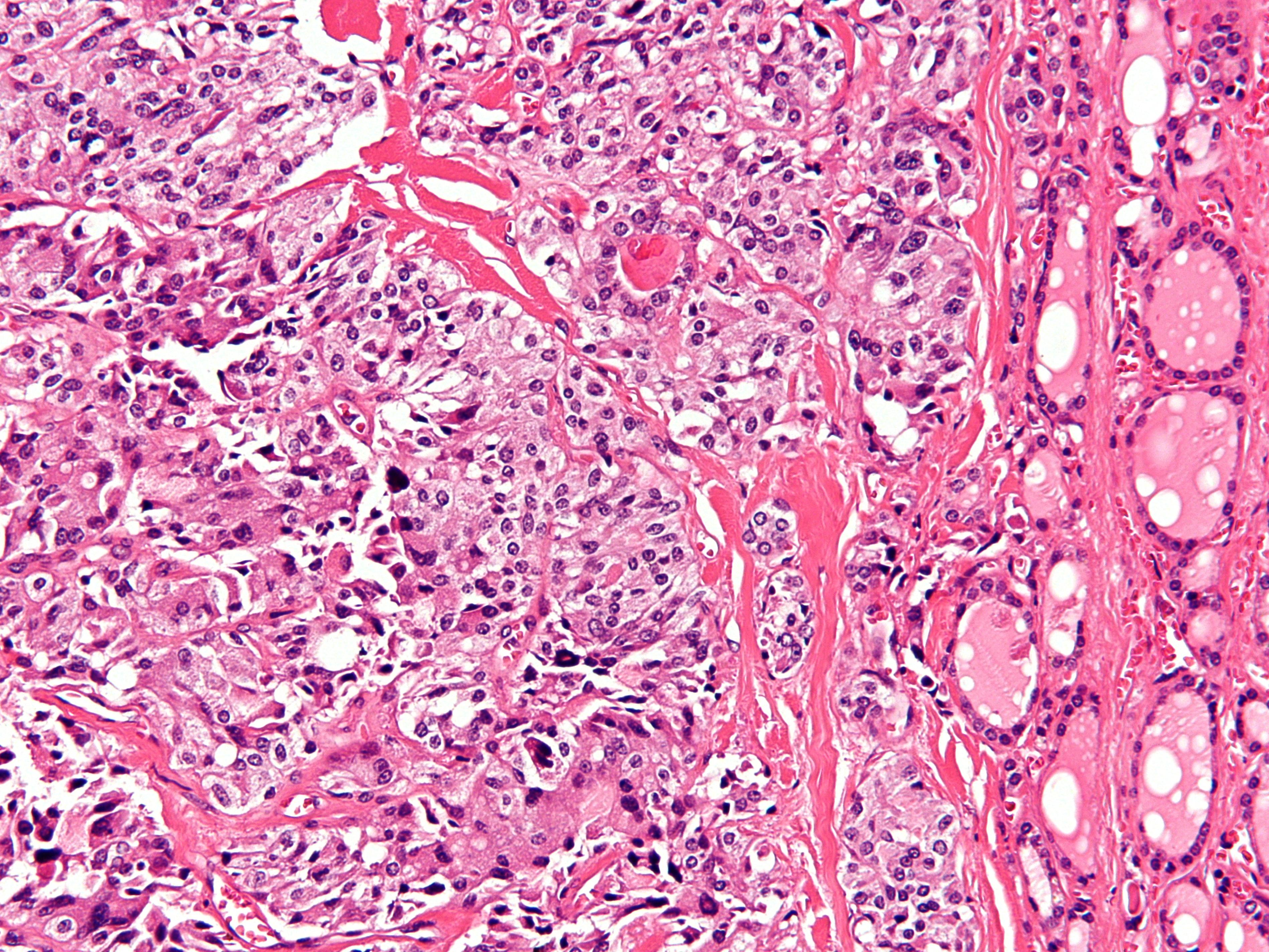 NCI-funded researchers are working to advance our understanding of how to treat thyroid cancer. Most thyroid cancers are found at an early stage and can be treated successfully. Scientists are now working to understand which people with thyroid cancer can safely choose less treatment for their disease, to minimize side effects. Research is also needed to find new treatments for rarer, aggressive types of thyroid cancer.

This page highlights some of the latest research in thyroid cancer, including clinical advances that may soon translate into improved care, NCI-supported programs that are fueling progress, and research findings from recent studies.

Over the last two decades, a major concern regarding thyroid cancer has been overdiagnosis – that is, the detection of small, slow-growing thyroid tumors that may never cause a medical problem. These tumors, also called nodules, are detected through screening, either by feeling the neck or using ultrasound.

When a suspicious nodule is found on a person’s thyroid, a fine needle biopsy is often used to determine whether the mass is cancerous.

However, up to one-third of the time, pathologists can’t determine from the appearance of the cells whether a nodule is cancerous. In the past, people with inconclusive biopsy results would have had to undergo removal of the half of the thyroid (called a lobe) that contained the suspicious mass. In many cases, this turned out to be overtreatment because the mass did not contain cancer.

In the last several years, however, NCI-funded researchers have developed genomic tests that can help tell whether such inconclusive nodules are cancerous and require surgery. These tests have the potential to spare many people potentially unnecessary surgery. In the future, the tests may also be used to select treatments that match the genetic characteristics of individual cancers and determine how much of the thyroid to remove.

Because the prognosis for early-stage papillary thyroid cancer is so good, scientists have been studying whether some patients can safely receive less extensive surgery. This would spare them the need to take thyroid replacement hormones for the rest of their lives. Treatment options could include:

In rare cases, papillary thyroid cancer can be aggressive and progress despite surgery and radioactive iodine treatment. In recent years, the Food and Drug Administration (FDA) has approved two targeted drugs for such cancers: sorafenib tosylate (Nexavar) and lenvatinib (Lenvima). Both drugs block the action of several different altered proteins that promote cancer cell growth.

One of the altered proteins that sorafenib blocks is produced by a mutant form of the BRAF gene. This gene is found in some patients and promotes the development of aggressive papillary thyroid cancer. Additional drugs that target this altered B-Raf protein are being tested in people whose papillary thyroid cancer has recurred or progressed despite treatment.

NCI researchers are also studying how the B-Raf protein interacts with other proteins, with the goal of identifying new drugs that target these interactions. Additionally, researchers are looking for other genetic mutations in papillary thyroid cancer that could be targeted with new treatments.

Read More:  Research Says These Specific Facial Expressions Mean Someone Is Definitely Interested In You, So…

The Thyroid Specialized Programs of Research Excellence (Thyroid SPOREs) are designed to quickly move basic scientific findings into clinical settings. The Thyroid SPOREs support the development of new therapies and technologies, as well as studies to better understand the genetics, biomarkers, and treatment of thyroid cancer.

Scientists in NCI’s Division of Cancer Epidemiology and Genetics (DCEG) conduct both national and international research on thyroid cancer. Studies include those that have an environmental focus, such as exposure to radiation and thyroid cancer, as well as those analyzing physical risk factors and thyroid cancer.

The following are some of our latest news articles on thyroid cancer research: